One of the first indies I remember playing, and reviewing, on Xbox One was Eclipse Games’ Super Toy Cars. My memory being what it is, I thought it was something that I’d enjoyed, but that wasn’t the case. It did, however, lead me to request the third game in the series when I saw that it was out. That is: Super Toy Cars Offroad.

Almost seven years have passed since the original game released onto Microsoft’s last console. In that time, I’ve played a lot of racing games, all of which seemed to range from decent to great, with just the odd exception. We’ve truly been spoiled in that regard.

Sadly, time hasn’t been kind to this particular series, as it’s in a worse state than before despite almost a decade having passed by. It’s too bad, and I hate what I’m about to say.

As its name suggests, Super Toy Cars: Offroad  moves the vehicular action away from asphalt tracks, and takes it outdoors. The result is a game that mixes elements of Mario Kart, Motorstorm and other arcade racers, but doesn’t do so well. Put simply, it’s a broken experience. 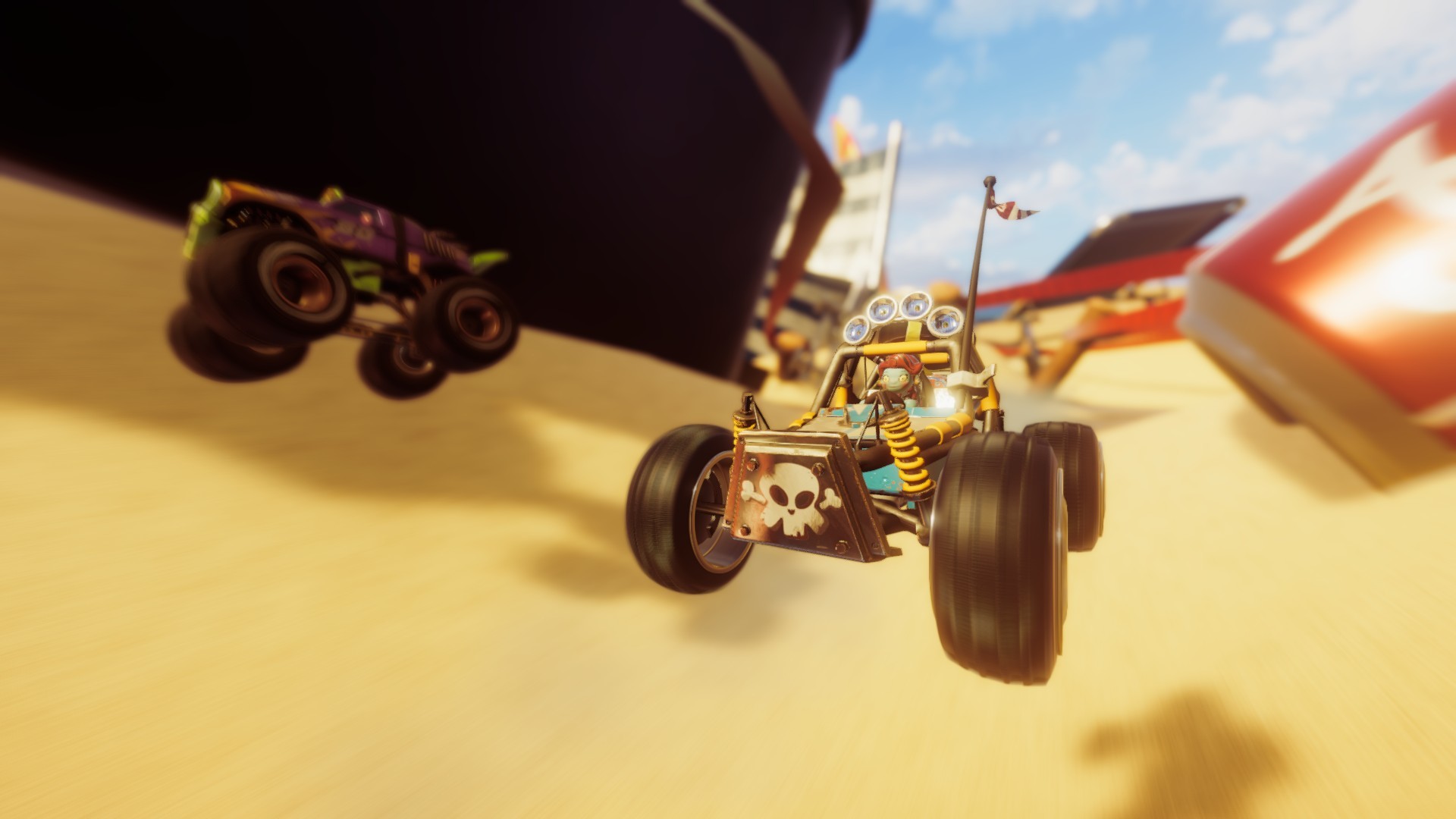 When you start this proverbial engine, you’ll see that there are tons of different cups to complete. In fact, there are several different tiers, each with their own macho name, but what it all boils down to is which cars you can use in each one. That’s all. Some allow smaller vehicles, some only allow massive ones, and that kind of thing. As such, you’ll be buying and upgrading miniature versions of drift cars, giant trucks, Jeep(s), SUV(s), ATVs and buggies.

In fact, one of the best things about Offroad is its roster of somewhat cool vehicles. Sadly, a lot of them control like crap, and will need upgrades in order to compete. This becomes evident right from the get-go.

At the time of writing, I’ve completed almost all of the game’s many cups, which are made up of one to three events. You do your best, earn points for where you placed, and then it’s all tallied up in the end, during a shot of the top three racers on a podium. I still plan to go back and finish the last two or three, but honestly ran out of time before I had to go volunteer.

In total, I’ve played this thing four times, and for several hours. One or two of those restarts was due to crashing, which occurred this morning and did so at a horrible time. I’d just completed — and come first in — all three of one tier’s final races, before the game crashed before the podium screen. I knew something was up, because the frame rate tanked.

Before we move on, let’s talk about the events that I keep mentioning. There’s actually quite a few different types:

Races: These are typical kart racing events, where 8 drivers use drifts, boosts and items in an attempt to take first.

Clean Races: These remove the items.

Death Races: The last one standing wins. All you have to do is avoid blowing up, which happens when your health bar is fully depleted. It’s easier said than done sometimes.

Time Trials: Complete two solo laps as quickly as you can.

Time Attack: Speed from one checkpoint to the next, while collecting clocks and destroying dummy cars to extend your clock. The driver who reaches the last gate fastest wins.

Destruction: Ram, and use items on dummy cars, in an attempt to destroy as many as possible within a given time limit.

Drift Challenges: Drift in the marked areas to earn points.

Elimination: Stay out of last place, because the driver who occupies that spot (once the countdown ends) will be eliminated. This keeps happening until only one remains.

The list of available items includes a rocket that often misses, a shield that protects you, a platform that sends cars flying into the air, a typical single use speed boost and a magnet. The latter is used to grab environment items, like gigantic pop cans, rocks, fences and more, which can be thrown at other racers. Again, this almost always misses or does little damage, much like the rockets and the giant 8 ball that you’d think would roll on the ground. It doesn’t, and you’ll be lucky if it hits one other driver before flying into the distance.

This all takes place over several different tracks, including one set on a beach, another set on a construction site (complete with a dangerous saw and a moving bulldozer), one based on a dark fairytale forest, a frozen winterscape and one that is supposed to mimic a Japanese garden. Needless to say, they’re pretty typical archetypes. They’re also half-decent, except for the fact that shortcuts sometimes slow you down, and that it can sometimes be hard to tell where to go next. It doesn’t help that the cars are often too fast for the tracks, or that the game’s textures are severely lacking. Then there’s the shockingly high bloom effect that bleaches things of colour and detail.

Driving on these tracks can be fun when Super Toy Cars: Offroad decides it wants to work, but it so often doesn’t. I spent more time fighting the game and its poor controls than I did my opponents. It was especially fun when I’d see them fly by me as I failed to gain traction and speed while driving on sand or mud, in an offroad game!

It honestly feels like this sequel or spin-off isn’t complete. Hell, I’m convinced it was released too early. The game is just way too buggy, ugly and inconsistent, and it’s broken more often than not. I can’t tell you how many walls, rocks, etc. I drove through, how many weapons completely missed their homed-in targets, or the strange things that happened as I was playing it. Sometimes I’d even lose first place for no sane reason, or would watch as the standings failed to adjust.

I also noticed that the developers dropped online multiplayer, which was part of the second game. It’s a notable omission in today’s age, but I honestly think that the folks behind this title made the right decision to forego online play. The core game is broken, and multiplayer likely would’ve been an unpopular mess.

I must admit that there were times when I had some fun with Super Toy Cars: Offroad, but these moments weren’t common. Only a couple of the cars were enjoyable to drive and control, but I wasn’t able to use them in every race, nor were they available to me for the first while. Even then, lots of strange things happened, and a good amount of frustration ensued. Hell, even the limited golden wrenches — which unlocked occasionally, and  I assume were supposed to fully upgrade vehicles — didn’t seem to do anything.

Last, but not forgotten, is Super Toy Cars: Offroad’s presentation, which is not good.

The most noticeable thing is how dated this game looks and plays. Although I reviewed the Xbox Series S version, nothing about it felt modern. The textures were severely lacking, the frame rate was poor, there was tons of clipping and it was hard to gauge what I could drive on and what would slow me down. As mentioned before, the environments were also often so bleached by an overactive bloom effect, that it was hard to differentiate much anyway.

Some of the car and driver models looked pretty neat, though, and I do think that kids would’ve had fun driving these miniature caricatures if the game functioned as intended. They also would’ve liked being able to drive as a fat tomato man, a badass Barbie, a ninja, a zombie (I think) or a macho man.

The less said about the sound, the better. However, I have to talk about it.

As expected, there are car, engine, crashing and explosion sound effects to be found here. They’re kind of serviceable, but far from good. What’s always been shocking about these games, though, is how good their licensed soundtracks tend to be, and that’s no different here. I don’t think I heard a song I didn’t like, and I hadn’t heard of any of these rock, synth, 80s and alternative bands.

There was just one problem: only one song kept playing during my two longest sessions. Why? I don’t know. The same song would repeat during every event, no matter how many I completed or quit. Not the same song either, as each time there was a different repeating tune. Needless to say, it got annoying.

With all that having been said, I must admit I feel like a jerk right now. Eclipse Games is an independent developer trying to find success in a challenging industry, and here I am shitting on another of their games. I wish that weren’t the case, but Super Toy Cars: Offroad is not good at all, and spending (around) twenty dollars on it will just lead to self-hatred. This game is an unfortunate mess and occasional disaster.

This review is based on the Xbox Series S version of the game. A code was provided by Eclipse Games.