It was initially enjoyable to see all of the buildup surrounding the Commonwealth, and the huge shakeup it promised to bring to the established survivor communities on The Walking Dead. Lately though, especially as we continue to linger in the final season’s tedious middle stretch, it feels like The Walking Dead doesn’t know what to do in the interim before a climactic Commonwealth conflict actually unfolds. This issue remains apparent throughout, “Trust”, an episode that explores some interesting character arcs, but still fails to move The Walking Dead’s plot forward in a truly satisfying way.

Worse still is that this episode finally picks up where that flash-forward from the start of Season 11B occurs, and it amounts to pretty much nothing. Despite the exciting prospect of a battle brewing between Daryl and Maggie, as respective representatives of two very different communities, Daryl simply uses his position in the Commonwealth’s army to prevent Hornsby from forcing his way into Hilltop, after he contrives an excuse to try and break into Maggie’s community so he can look for the Commonwealth’s missing guns. This could have been a nicely thrilling idea, but Daryl clearly hasn’t drunk enough of the Commonwealth kool-aid to leave his loyalties seriously in question, least of all after the stunt Sebastian pulled with him and Rosita during the previous episode.

Even after a hair-raising stand-off between Elijah, Daryl, Maggie and the Commonwealth soldiers, complete with Daryl dropping an uncharacteristic F-bomb (you weirdly don’t hear them often on this series, despite The Walking Dead’s source comics being filled with cursing at times), Hornsby and his men simply leave, and nothing really happens. This episode’s core plot at Hilltop really doesn’t work, especially when the series already appeared to indicate that Leah is the one that took the Commonwealth’s guns. Making things even more confusing is the end of this episode, wherein Hornsby corners Leah, only to try and recruit her? So he can fight Maggie? What? I get that Hornsby wants to expand the Commonwealth’s territory, but what exactly is his plan here? Does Hornsby seriously think that Pamela is going to go along with him conquering the revitalized Hilltop, especially after all of the resources that the Commonwealth has already committed to repairing Alexandria?

While that confusion was unfolding, trouble continued to brew within the Commonwealth itself as well, at least, to some extent. Truth be told, this episode focused mostly on passive conflicts here, and mostly nudged Sebastian’s corruption into the background. Rosita confides in Eugene about Sebastian forcing her on a walker-filled heist, something that Eugene in turn confides in Kelly and Connie, but the group nonetheless find themselves unable to proceed further, since they don’t have an ‘in’ with the Commonwealth’s inner circle. This is where Eugene finds an excuse to recruit Max, which appears to be a trojan horse for Eugene and Max solidifying their romance, more than actually attacking the Commonwealth’s infrastructure to any meaningful degree. 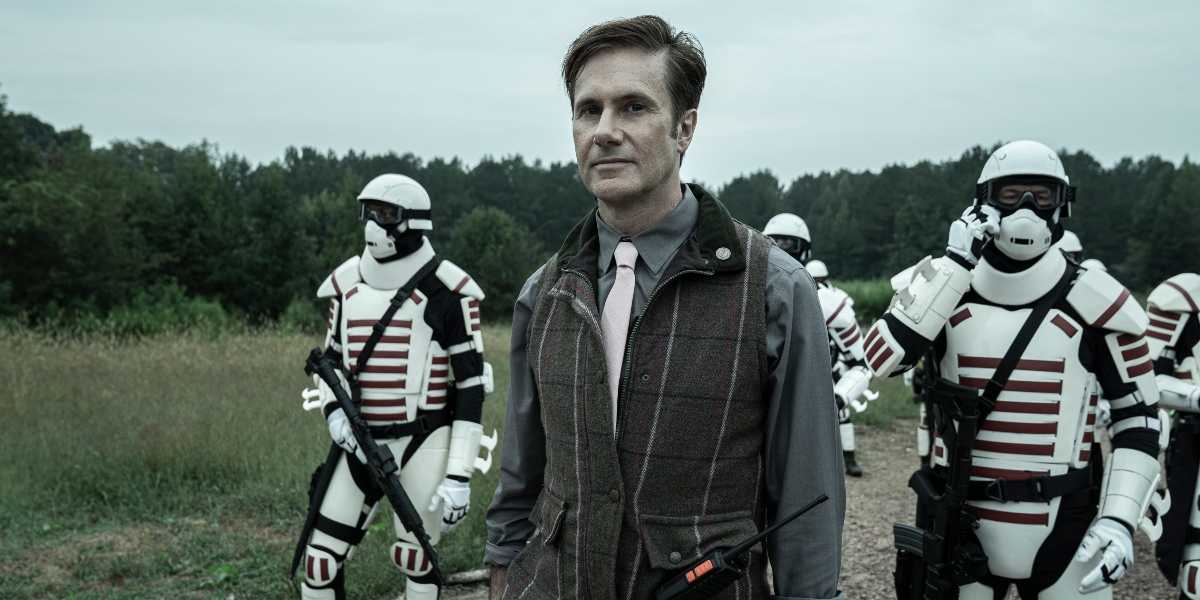 Max actually gets caught between two separate character arcs in this episode, since she also serves as a voice of reason to her brother, Mercer, or, as she knows him, Michael. We also learn at the very start of this episode that Mercer’s relationship with Princess has deepened, and the two are now sleeping together, having also emotionally bonded. As much as this Mercer/Princess romance storyline was essentially a C-plot, it actually proved to be one of this episode’s highlight storylines, as we get to see a different side of both Mercer and Princess, what with Mercer struggling with having to kill two of his own men after the revelation of Sebastian’s plot, and Princess getting a chance to be the emotional pillar for Mercer’s anguish. I wish that a bit more focus was placed on this budding relationship, frankly, especially considering that Princess and Mercer haven’t been part of this show’s cast nearly as long as many lead survivors that we’ve come to know very well by this point.

It was also gratifying to see Ezekiel find an unexpected way to cope with his moving up the line in the Commonwealth surgical queue. Apparently, Ezekiel has opened a secret health clinic that’s meant to treat people who can’t move up the list of Commonwealth medical procedures, a clandestine operation that he eventually ropes Tomi into. Carol also bears witness to Ezekiel’s efforts to repay the Commonwealth citizens that he bypassed in the queue, and there’s even a bit of a hint that Ezekiel still loves Carol, even if Carol doesn’t seem quite so receptive to these feelings anymore. Regardless, seeing Tomi finally get a chance to break away from the Commonwealth’s rules marks another welcome opportunity to witness one of The Walking Dead’s newer survivors flourish in a fulfilling storyline. Not only that, but Tomi’s and Ezekiel’s bypassing of Commonwealth procedure could actually deliver exciting consequences down the road, even if we’ll probably be waiting for this season’s final third to see that happen.

“Trust” ultimately spends too much time spinning The Walking Dead’s wheels, as the series continues to drag itself out in anticipation of next week’s midseason finale. Even so, some of this episode’s character arcs managed to be intriguing, especially those that dug into characters that haven’t been in this show’s ensemble for very long. It’s frustrating however that the series’ actual plot momentum continues to crawl at this stage, between Hornsby chasing his tail at Hilltop, and rendering that tantalizing flash-forward from several weeks ago a complete waste, as well as Max being more concerned about her romance with Eugene, rather than actually making a move against Sebastian. The series is clearly laying the foundation for its final eight episodes later this year, whereupon we’ll no doubt see Hornsby and Sebastian spearhead the climactic threat to The Walking Dead’s flagship survivors, but the show still needs to pick up the pace if it wants any remaining viewers to care about how its narrative will finally end.

The Walking Dead 11.15: "Trust" Review
The Walking Dead plods through another week with more time-wasting at Hilltop, while a couple of interesting character arcs elevate an equal lack of momentum at the Commonwealth.
THE GOOD STUFF
THE NOT-SO-GOOD STUFF
2022-04-07
67%Overall Score
Reader Rating: (0 Votes)
0%