Sports games in the Mario franchise have been a long running staple of Nintendo’s headline mascot. From golf to tennis, baseball to the Olympics, and even that one basketball game on the Nintendo DS, Mario has seemingly played every sport ever created.

One of the most beloved Mario sports titles was GameCube’s Super Mario Strikers, released in 2005, which quickly earned a sequel for the Wii in 2007. For the last 15 years, however, with the exception of a few golf and tennis outings, Mario has remained quite unathletic.

Battle League is a uniquely-Mario experience in its character roster, and all your favourites are here. We also all know the rules of the game–get the ball in the opponent’s net–so we can skip much of the explanation here.

Strikers opens up with a series of quick tutorials of how to play Nintendo’s version of the classic international game, then the real magic happens.

Nintendo has brought a bit of Smash Bros. to the soccer formula with the ability to pick the arenas in which you play, but what’s unique to this draw is that each half of the field represents the team you’re bringing to the match. Play on a pitch that is half Donkey Kong’s Jungle Retreat, half Bowser’s Lava Castle, or add a mix of Luigi’s Spooky Mansion with his brother’s Mushroom Hill. There are only five arenas to choose from, but this still gives a series of 15 possible combinations.

Going back to the official rules of soccer, that’s more of a loose framework for the game. In actuality, knocking balls into nets is the closest you’ll actually get to playing soccer in this game. The referees preventing you from knocking your fellow characters over have been replaced by, well, nothing, and the edges of the pitch have been replaced with what appear to be very painful electric fences. Those two things are a nasty combination, because knocking an opponent into the fence will give you the perfect opportunity to grab the ball without a red or yellow card.

There’s a lot to be said for being strategic, however. Simply body-slamming your opponents all the time will mean you’re missing opportunities to grab the ball, or even items that are being thrown on the pitch by the uproar of fans watching the game.

If you’re going for a mix of strategy and brutality, while still ultimately vying for victory, hyper strikes are going to be your best friend. The most accurate and powerful shots in the game, hyper strikes are also worth double the points, making these a potential game-winner to achieve.

A hyper orb will randomly fall onto the pitch, and when your character grabs it (and is subsequently surrounded by lightning), you can set up an admittedly-tumultuous series of steps to initiate an insanely badass offensive strike on your opponent. If you manage to time your jabs on the shoot button appropriately, meeting the swinging bar in the target zone, you’ll be left with a feeling of utter satisfaction as an outrageously self-serving animation plays and obliterates the goalie on the opposing team. 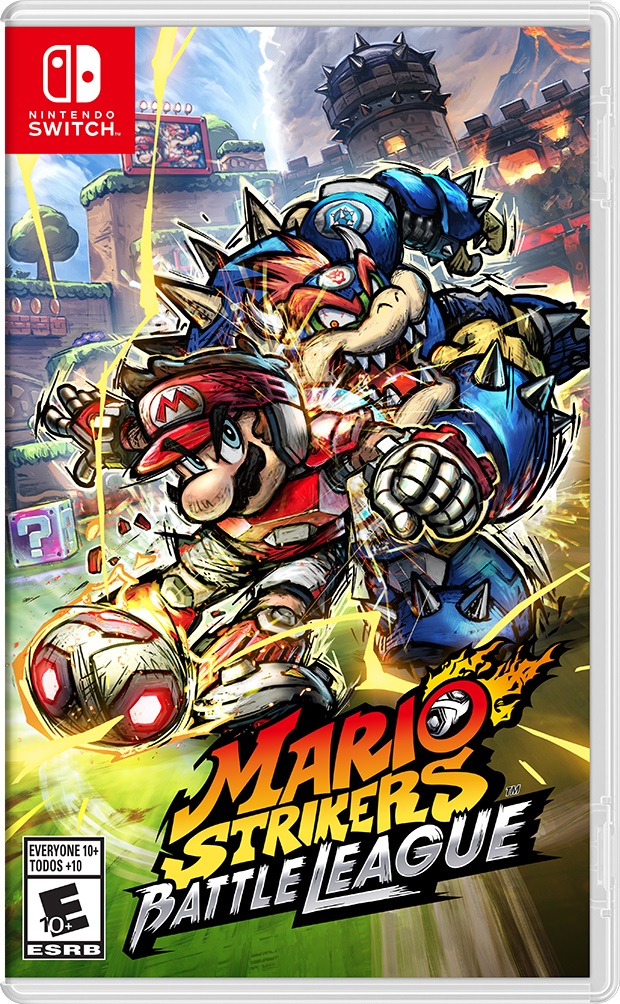 All this being said, it’s not an easy trick to pull off, and while doing so, you’re laying out in the open and exposed, susceptible to body tackles that can pull you right out of the hyper strike zone.

But if you do manage to pull it off? Sweet, sweet victory.

And that’s kind of the whole point of Battle League. You know the soccer formula and you know it well. But this isn’t it. This isn’t trying to be a simulation sports game with realistic teams and players and beads of perfectly-rendered sweat dripping onto perfectly-rendered individual blades of grass. This is about ridiculous fun with characters we’ve known and loved since the late-80s playing a game of ridiculous soccer on ridiculous pitches with ridiculous move sets.

And if that’s the criteria for a Mario-based soccer game, Mario Strikers: Battle League scores every single time.