Despite its popularity in written fiction, TV and even movies, the Wild West is an underutilized setting when it comes to video games. Sure, two of the most popular releases of all-time happen to be Red Dead Redemption and its sequel, both of which are westerns, but other than them they’re few and far between. When I think of the genre, only GUN (which I loved) and Red Dead Revolver come to mind; at least, without counting the two aforementioned behemoths. For this reason, Evil West stood out to me more than it normally would’ve. Flying Wild Hog’s dark, bloody and downright violent game looked like it would scratch this itch for me, and also looked like it would be fun in the process, which is why I requested a review code.

It helped that I’d been hearing a lot about the game online, though I admittedly hadn’t followed it closely enough myself.

Evil West comes to us from Poland, through a studio that is known for having developed titles like Hard Reset, Hard Reset Redux, Trek to Yomi and the Shadow Warrior trilogy. Most of those games share something in common, with that being the fact that they draw inspiration from old school arcade shooters; some of which I grew up playing on an old Pentium 1. Evil West does not share this trait, because it’s something new for Flying Wild Hog: a character action game, which is reminiscent of something from the Xbox 360 and PlayStation 3 era. I know I played a lot of them during that generation.

This is the campy and unrealistic story of Jesse Rentier — a westerner who is different from the ones we’re used to seeing and portraying. You see, Jesse just so happens to be second in line to the leader of what is known as the Rentier Institute. Headed by his father, it’s an old fashioned monster hunting club which seems to have ties to the United States government. Their focus is killing things that go bump in the night, with the most specific variety being vampires. Those bloodthirsty bastards are everywhere! 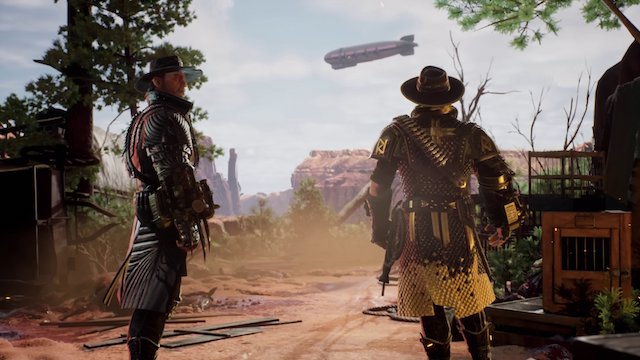 Our campaign begins when the proverbial shit begins to hit the fan, and a sect of vampires begins its quest to take over the country. Led by a vampiric monster in little girls’ clothing, it aims to spread its disease throughout the United States, and plans to do so with help from other monsters. The result is a twelve to fifteen hour long story mode, in which one or two players (via available co-op) must bash their way through tons upon tons of different creatures, be they vampires, werewolves, spider monsters or big, hulking beasts. Don’t even get me started on the wasp-like creatures, or the dragon-style beasts.

Being that it’s — at heart — a third-person character action game, Evil West is full of hard edged combat. It’s predominantly handled through a gauntlet, which Jesse wears on his arm and can summon electricity with once it’s upgraded. You’ll predominantly bash your way through enemies, but must make use of other weapons and abilities if you hope to stand a chance in this challenging world. To say that Evil West pulls no punches would be putting things correctly, because it is not an easy game. In fact, its normal difficulty seems to have been mislabeled. The same goes for its ‘story’ difficulty, which is supposed to be the easy one. In no way is it a challenge level befitting those who would just like to experience a story.

I played through the majority of Evil West on normal, but one particular boss frustrated me enough to drop down to ‘easy,’ because I wanted to finish the game and call it a night. There simply weren’t enough healing options, and I kept getting pummeled by said boss in ways that felt kind of unfair, so I made the change. However, while the next few levels were noticeably easier, the game was never ‘easy.’ Its penchant for throwing everything but the kitchen sink at you makes for a challenging experience no matter which option you’ve selected. This is especially true considering we’re talking about a game where one level’s miniboss will later appear in duplicate or triplicate, along with other beasts, as you move through latter stages.

As I wrote above, combat is primarily handled through Jesse’s gauntlet. However, as you progress and level him up, you’ll unlock new weapons, buy new upgrades and find/unlock additional perks. A revolver may be your first gun, but you’ll quickly find yourself using a rifle which is much more effective. Then, later on, you’ll get a crossbow which fires more quickly but does less damage overall. Meanwhile, the X button eventually becomes a limited use shotgun, Y allows you to temporarily stun all enemies in the given area (by electrocuting them en masse), and the B button lets you heal whenever the ability is available. All of the above need to reload, so to speak, and take a bit of time to do so once used. Thus, there’s some strategy in when and where to use each one. Then again, you’ll likely use them all a number of times during hectic battles, of which there are many. 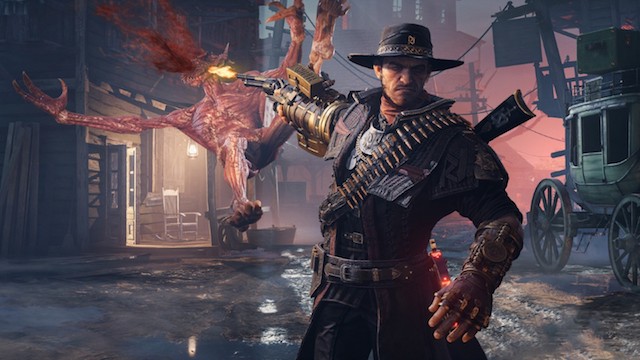 Jesse also gets access to other weapons later on, including sticks of dynamite, an arc gun, a flamethrower and a heavy machine gun. However, like the others mentioned above, these can only be used so often before they need time to cool down and regenerate. Most often it’s just the player and their base abilities, including heavy punches, electricity-fueled hits and ground slams, and being able to roll away at will. Sometimes running and rolling away from enemies is the key to surviving.

Being able to electrocute enemies individually or en masse happens to be the best and most helpful ability found within this challenging game called Evil West. That said, weak points aren’t far behind. All enemies have patterns they follow, but focusing on them can go to hell when there’s tons of baddies to deal with at one time. Your best bet, though, is to watch for yellow circles, which show and provide an opportunity to shoot at a foe’s weakpoint. Landing a number of shots there can help turn the tide of a tough battle.

It’s also important to note that Jesse can also block, but rolling around and avoiding danger seems to work best. Oftentimes things were too hectic to even really think about blocking.

The rest of the experience is very similar to an older character action game from ten to fifteen, or so, years ago. You’ll explore different environments (snowy peaks, an abandoned rail yard, wild west towns, caves, poisonous grottos, abandoned buildings and more), all while searching for hidden chests and bags of money, the latter of which is used to purchase upgrades for each weapon and ability. There’s even an achievement for finding every bag of money, if that’s your thing. I did my best to find them all, because I’m thorough, but I missed some. 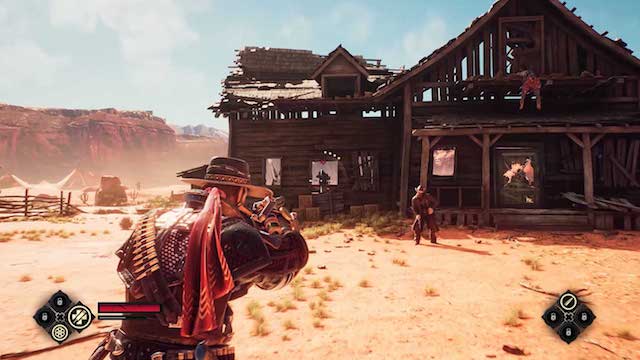 As you explore, you’ll solve light puzzles to progress, but these are pretty limited. Some require getting to different vantage points and shooting targets to open doors, or electrify switches, while others will task you with electrifying switches by running to a generator, becoming electric and getting back to the switch within a short period of time. Others, still, require moving crates, platforms or train cars to reach new areas.

Evil West is a stage based game, as opposed to something open world. It has approximately 16 stages and will take you over ten hours, but likely closer to thirteen. In-between a lot of the levels you’ll be able to visit a hidden bunker inside of an old saloon, talk to your allies (including a doctor and a very annoying scientist) and even redo your perks and upgrades if you see fit. There’s not a lot to do in this ‘town,’ but it’s something, and pushes the narrative forward.

To be honest, though, the story found within this game didn’t do much for me. It was campy, kind of silly, and jumped around more than I liked. I eventually lost interest and must admit that, but others may enjoy it more. Jesse, himself, is a rough and tumble protagonist, and his friend/co-op partner is very much the same. They aren’t memorable protagonists, nor do they really stand out, but they fit this style and narrative. They’re basically just badass cowboy monster hunters who grunt and tell people how it’s going to be.

Continuing on with the bare honesty, I must admit that I didn’t really like Evil West at first. It seemed basic, dated and kind of sluggish. However, it grew on me a good amount once it really opened up. While the first few stages are kind of mediocre, things get quite a bit better after them so stay with it. The combat gets much faster, much more intense and honestly a bit too chaotic, but it can be pretty fun. It would’ve been nice if I’d been able to feel like a badass more often than I did, though, because of how challenging and cheap this game can be.

When it comes to presentation, this is an above average affair. It sometimes looks a tad muddy, but often looks quite nice, thanks to some really impressive art direction and above average visuals. There’s lots of darkness to it, but also lots of colour, including orange from fire and TNT explosions, as well as the green poison of your everyday poisonous grotto. The level design is also quite impressive, even if this is game that is mostly linear and predominantly sends you from one arena fight to another. Most of all, though, it’s the creatures and bosses who stand out. There’s some very good creature design on display here.

For the most part, everything ran well on our Xbox Series S review unit. The sound was also pretty good, although it wasn’t up to the level of the visuals. The music fit well and sounded decent, the voice acting was alright and the writing did its job. Nothing about the audio truly stood out, but there were lots of grotesque sounds to listen to, including limbs being ripped apart, enemies exploding and things like that.

Overall, Evil West is a solid and enjoyable game, albeit one that will be too difficult for some folks. There’s nothing easy about its ‘story’ difficulty, and ‘normal’ is another way of saying hard. The combat can also get quite repetitive, meaning things drag and create peaks and valleys throughout the campaign. It’s worth checking out, though, especially if you’re a fan of this type of Xbox 360 era third-person action/adventure/shooter mix. It’s pretty good, but nothing amazing.

Evil West Review
Evil West is a solid throwback to the days of the Xbox 360 and PlayStation 3, but is held back by a cheap difficulty level and repetition.
Visuals79%
Audio70%
Gameplay76%
Storyline60%
The Good Stuff
The Not-So-Good Stuff
2022-12-29
71%Overall Score
Reader Rating: (0 Votes)
0%