There are times where a game comes out of nowhere and piques your interest, after having heard nothing about it at all. In this case said game was Finding the Soul Orb, from eastasiasoft and developer Tonguç Bodur. I saw a friend playing it, wondered what it was all about and decided to request a review code for myself. Now that I’ve played through the indie affair, I’m left unsure of what score to give it because, while it’s very rough around the edges I do respect the effort that went into its creation.

Finding the Soul Orb is set in medieval times, and has you playing as a man named Alexander, who’s returned to his home village after being away sailing. Our protagonist expects to simply be able to return home to see his parents, relax and have a nice visit with them. However, the world around him — and the King — have different plans. You see, the village has been under attack by werewolves who stalk the fields and threaten villagers’ lives. It’s made them afraid of working the fields, and has helped lead to starvation for everyone but the King and his loyal supporters. This lack of food and respect for the common man has also, unsurprisingly, created anger towards the King. This isn’t helped by the fact that he spends little time interacting with, or listening to, his people and their concerns.

In the past, the local wizards created something called a Soul Orb, which helped protect the village. Now, it’s lost or in hiding, and it’s up to Alexander to find it in nearby caves. It, alone, will help change the village’s fortune in its seemingly never-ending battles against other villages and the aforementioned werewolves. At least that’s what I gathered as I played through a campaign which uses lit up platforms to tell its text-based story. Simply put, you walk onto these many circular platforms, the screen brightens and text appears. It chronicles the village’s story, eschewing voice acting, which is only present when you’re listening to the Soul Orb speak.

At its core, this is a first-person shooter mixed with a walking simulator, but there’s little in the way of shooting. It’s true that you’ll come across werewolves that must be dispatched by crossbow bolts, but you’ll only encounter around forty of them throughout the 12 chapter-long experience. A lot of this title involves walking through different environments, be they caves or the village itself, with the occasional basic puzzle or moving platform thrown into the mix. When you do encounter werewolves, they’re in groups and confined to closed-in areas. Once you dispatch all of the man beasts, the way forward will become unblocked, represented by the pathways’ energy-based blockades turning from red to green.

I’ll get right to it and state the truth: Finding the Soul Orb is a very basic, dated and unoriginal medieval fantasy game, which doesn’t feel next-gen or even last-gen. Its shooting mechanics are very basic, and if you don’t wait for the aiming reticle to become small — which signifies a well aimed shot — your arrow may come out diagonally and miss its target by a long shot. It doesn’t take long for Alexander to reload, but the werewolves will slowly come at you, and multiple hits will lead to death. Thankfully, you just respawn right where you died and get to ‘keep’ the damage you’ve already dealt to nearby enemies. That said, I only died once or twice during combat. The other times were from falling into water, or off of the side of a pathway. This isn’t a very difficult game at all, and it doesn’t include any different challenge settings. 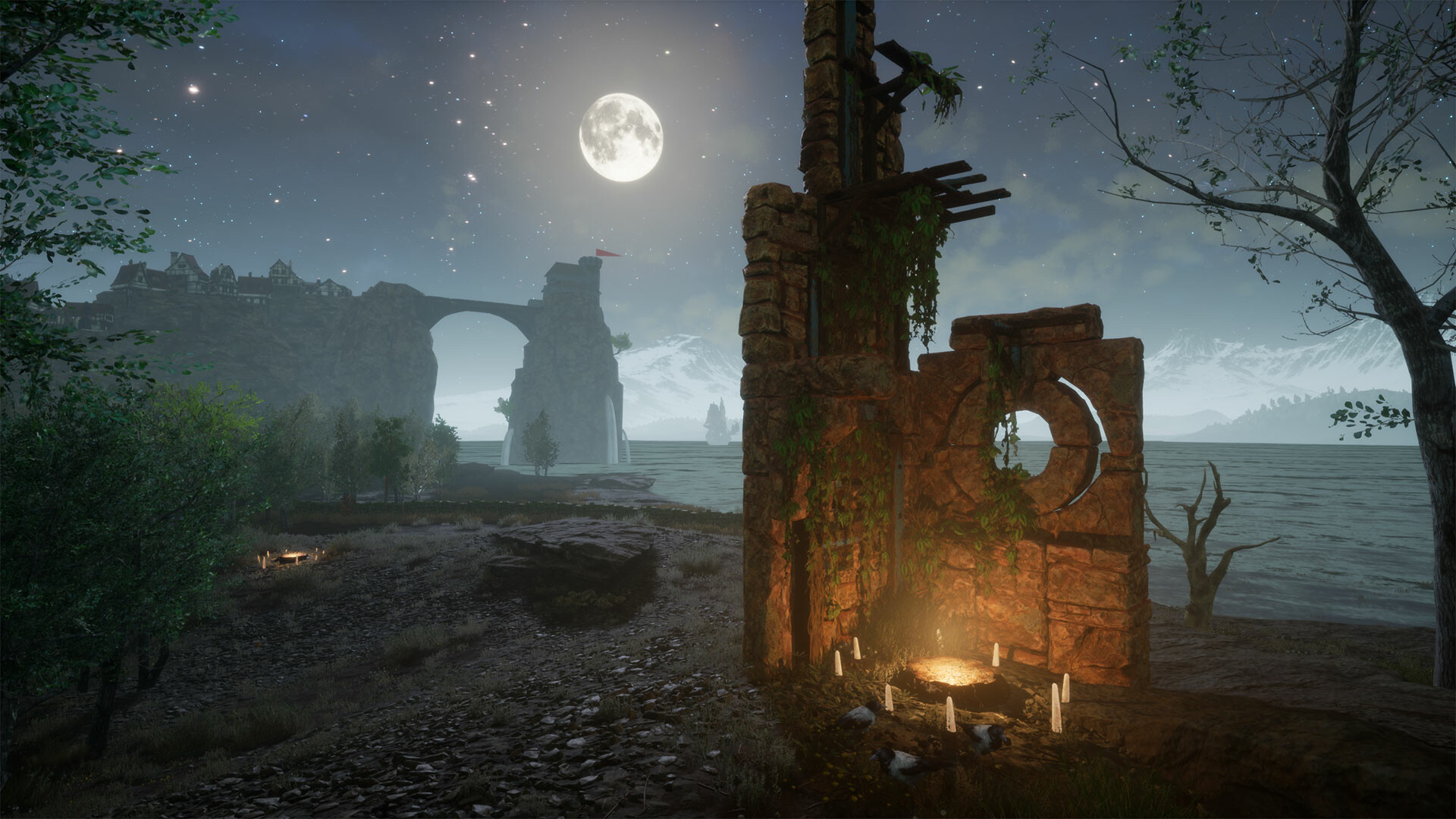 Otherwise, this is very much a walking simulator, and not a great one at that. Alexander’s walking speed is slower than slow, but his running speed is actually pretty good, meaning it’s not hard to get through the environments. Furthermore, you’ll want to take your time in doing so if you care about achievements or trophies, because almost every chapter features a gargoyle to shoot and up to two statues to find. If you take your time and find all of these, you’re looking at an easy 1000G or maybe even a platinum trophy, if it has one. That is, if you care. I’m not all that interested in such things, but I know some still are.

The best part of this experience comes in the form of its presentation which, despite being up and down, is actually pretty good overall. There were times where the game slowed down and I could notice the frame rate dropping, but other than that it ran smoothly. I spent a good amount of time gawking at the skies during my two hours with this thing, because the skyboxes were shockingly great. The same was true of their lighting, and some of the outdoor environments, which looked quite nice. Sure, some of the rock, tree and building textures are dated, but I was pleasantly surprised at times. The same level of impressiveness didn’t carry forth into the dark caves and underground spaces, though, because the game tended to look dark and muddy during those levels.

The original orchestral score is also really good, especially for an indie game. It’s the thing you’ll hear most, as there isn’t much else to the game’s audio, outside of some basic sound effects from the crossbow and Alexander walking. All of the werewolves make the same basic growl sound, and it doesn’t stand out positively. Nor do their very basic animations and limited attack patterns. As for the voice acting: it’s filtered and has effects added to it, to make the Soul Orb sound mystical. It’s fine and above average.

At the end of the day, Finding the Soul Orb is not a good game. It’s dated, it’s basic, and it doesn’t stand out positively outside of some nice music and impressive looking skyboxes. I admittedly went in with low expectations after talking to my friend about it, but even though I feel like I enjoyed it more than him, I cannot, in good conscience, call it good or ok, or recommend it.

Finding the Soul Orb Review
Finding the Soul Orb is a game I respect, but not one that I can recommend. It's dated, doesn't have a lot to offer and is unfortunately hard to justify spending money on.
Visuals70%
Audio74%
Gameplay43%
Storyline30%
The Good Stuff
The Not-So-Good Stuff
2023-01-10
38%Overall Score
Reader Rating: (0 Votes)
0%