A new Mario game has arrived, and while that means that the typical Mario gameplay we can all expect is back, this game is so much more. It’s Nintendo’s first real foray into 3D on their handheld console, and it’s the best show of the platform yet.

What will first strike you is the colourfulness of the game. Bright, almost pure yellow opens the menu screen to reveal beautiful blues and reds. This is, by far, the most playful game I’ve ever played as a result, and there are so many great things to list about it, I don’t know where to start.

The audio has the classic voice from Charles Martinet that we’ve known since Super Mario 64, and it is very pleasing and familiar. Gameplay-wise, you’ll also feel something very familiar, not just because it is a Mario game, but because – are you ready for this, because it’s a huge statement:

This is the spiritual and actual successor to Super Mario Bros. 3, arguably the best Mario game ever created.

Why? Well, the almost blatant, but much appreciate over-use of the famous Tanooki (raccoon-tail) suit is the first hint. But then there are the mushroom houses with remastered audio taken straight out of the original title. There are amazing touches like the final bowser run from the first Mario series. Rushing past him to pound a switch that forces the bridge beneath him to crumble is just as satisfying almost thirty years later.

Levels have great gameplay nods to the best of the franchise, including Mario 64 and the Galaxy series. Nintendo clearly knows what they’re doing here, and they do it in a unique way, too. They’re not stuck with old gameplay mechanics. For example, this is the first of any 3DS game where the 3D isn’t a visual enhancement, but rather it changes the gameplay as well. It’s like the first time you played with a device that had an accelerometer in it, or the first touch screen you ever, well, touched, and were blown away. Your mind, for a few moments at least, can’t fathom what you’re seeing until it sets in. That is a massive accomplishment. It’s also the reason you buy this game. In fact, this game should be enough to sell you on a Nintendo 3DS as well. It is the only game I’ve played on the 3DS with 3D turned on full the entire time, not once lowering it because it bothered my eyes.

Some might consider the game too easy, and it does have some parts that are ridiculously easy, but others that will have you dying over and over again. In fact, if you die five times, you’ll get an invincible Tanooki suit that doesn’t run out until the end of the level, so unless you fall to your death, you’ll probably be fine. Die ten times, and it’ll just take you to the end. You can of course forego these options, but they do add that level of ease to a game where, if you die ten times, you should get up and try again, not get a free ride. Why? Well, by the end of the game, I had about 70 lives. Yes, SEVENTY. In a traditional Mario game, you might have six or eight, maybe ten. With seventy lives, you can get past 7 levels just by dying ten times in each one. Don’t get me wrong, the game has some very difficult moments, but once you die five times, those difficult moments fall away in the face of your invincible suit, and the game is yours, not to master, but simply to run though. 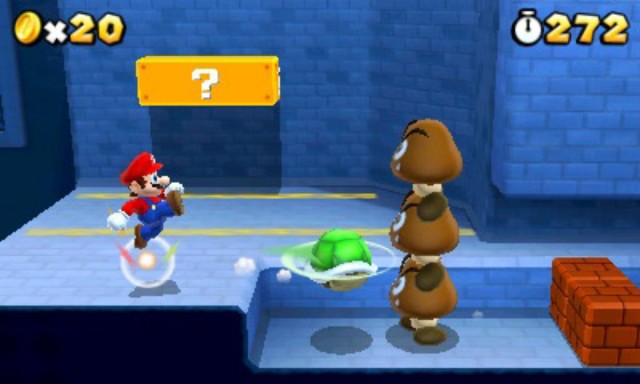 With that minor gripe, this game is perfect in nearly every way. It brings back this remarkable sense of nostalgia you really just need to play to experience. It is more fun that something like Call of Duty because those games are experiences, whereas this is jut plain ol’ addictive platforming FUN. There is a ton of content here, well beyond what you might expect out of the typical portable 8-world Mario game. Pick this one up – it is worth every penny and you’ll be fighting to keep your hands away from the 3DS for more than a couple of hours.

You’ll be hooked to this game, as you should be. It’s a ton of fun, and has the great classic but reinvented gameplay you know and love from the Mario franchise.

Just as a reminder, we actually met Charles Martinet at E3 back in 2010 and he has a special message for everyone reading this today:

Super Mario 3D Land Review
Super Mario 3D Land proves that the smart, creative minds at Nintendo haven't lost any of their touch. The game is full of ingenuity, strategy, and whimsy that can be enjoyed over and over.
VISUALS90%
AUDIO85%
GAMEPLAY95%
STORYLINE75%
The GOOD STUFF
The NOT-SO-GOOD STUFF
2011-11-11
86%Overall Score
Reader Rating: (0 Votes)
0%