Retro games have always been a big part of my life, influencing me in the games I play today. That’s part of the reason why I decided to start this retro game review series in the first place, as it gave me a chance to re-explore the intricacies behind these games.  Whether we’re talking about side-scrolling space shooters, action platformers or first-person dungeon crawlers, there are an endless amount of genres to choose from.

With so many people becoming consumed in today’s cutting-edge graphics and gameplay, it’s easy to forget about the games that started it all. Some might call them “archaic”, depending upon what generation you’re looking at, but retro games were actually really impressive for their time.  Due to console limitations, game developers could only do so much, yet they were able to create titles that paved the way to so much more.

In this series, I’ll be covering both classics and hidden gems that have stood the test of time.  Games that may have had their faults but still continue to inspire developers today.  I encourage you to explore these games for yourself, whether via console, Virtual Console/XBLA/PSN download or emulator.  Game on!

“Daggers and wingboots, mantras
and monsters await you.”

To the people who came up with the tagline for this game: I couldn’t have said it better myself. Regarded as one of the best games in the action role-playing platformer genre, this Nintendo game had everything you could have wanted in a game at that time. Unfortunately, the game was overshadowed by, you guessed it, The Legend of Zelda 2: Link’s Adventure, but that never stopped it from achieving cult status.

Players took the role of a young elf adventurer who has just returned to his homeland only to discover that an evil being known only as the Evil One has corrupted the neighboring dwarves, transforming them into monsters.  In order to stop the dwarves from completely destroying their homeland players had to set out, find the source of evil, and defeat it once and for all.

Setting off from your hometown Eolis, players explore a variety of enemy-inhabited landscapes, ranging from vast, maze-like fortresses to misty dwarf-infested ghost towns. Instead of having an over world map, players travel directly through each landscape with little to no backtracking along the way.

After listening to my boyfriend reminisce about the game growing up, I knew I had to try it out for myself.  It took awhile until that time actually came — imagine the countless other games I had on my to-do list — but I’m very happy to have taken the jump, despite some frustrations.

Most of those frustrations are pretty typical for games of its time. Faxanadu relied heavily on patterns and repetition.  Despite having an experience system it never quite required experience-based skill in the way your typical action-RPG would today.  You could literally be playing with your best weapon, armor and magic yet still be hit by the weakest of enemies. It didn’t matter that you had these upgrades, it just mattered that you didn’t get hit – hence the “platformer” genre inclusion.

And let me tell you, getting hit by enemies can be a total pain.  Take one hit and you could potentially be pushed back to the previous screen.  Annoying, yes, but it’s something you quickly learn to accept throughout the game.

One major complaint that’s practically unavoidable is Faxanadu’s password system.  While the Japanese version of the game allowed save slots, in the Western version you had to visit a church where you would receive a lengthy password or “mantra” which you would then enter the next time you booted up the game.  Many of the letters and numbers look very similar to each other so it’s very easy to screw up and lose your progress.  This happened to me a couple times already, luckily earlier in the game.  It’s definitely safer to save your old passwords and reload at an earlier time than having to start back from the beginning.

Faxanadu is a bit more forgiving than other games in the genre, mind you.  Here, you can buy potions, which you could use at any time in the game.  In addition, your trusty Long Sword, which you can purchase early on, made hitting enemies from a distance far easier than using your Dagger – kudos to anyone who can play through this game with that weapon alone.  Faxanadu certainly isn’t an easy game, but it offers just enough challenge and forgiveness for it to be a consistently enjoyable one. 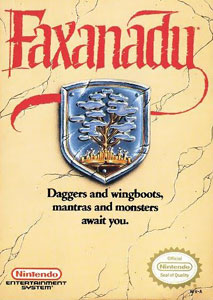 One interesting feature this game offered was its experience system. By accumulating experience you could potentially upgrade your title rank at any of the churches.  Once you received a new rank you would always have it, unless you lost your save state, and would then always receive a predetermined amount of Gould when booting up the game.  This definitely came in handy when low on money and needed to purchase something before setting off into the unknown.

The world itself is something worth mentioning as well.  While it might not seem so at first, Faxanadu’s graphics were intricately detailed and well portrays the overall atmosphere of the game.  In conjunction with the game’s timeless music, Faxanadu is really something to behold.

It’s no surprise Faxanadu is such a well-regarded game. I haven’t beaten it yet, but I can’t help but think about the items, enemies and environments still in store. The experience is sometimes frustrating, but consistently enjoyable if you’re willing to take the jump.