Does Mario’s latest sports excursion hit an ace? Or does he lose the tournament altogether?

Sports games have never really been our thing. We’re not particularly active individuals in real life here at Eggplante, and we don’t even like pretending we are in sports games. But when you add Mario into the mix, somehow things are a little bit different. 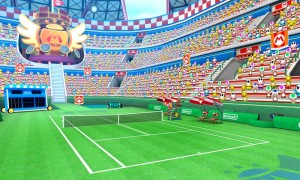 Mario Tennis Open is the third Mario game for Nintendo’s 3DS in about six months, not including downloadable titles. While the first two, Super Mario 3D Land and Mario Kart 7, were decent titles, we just can’t get excited about Tennis Open.

Everything you know and love about the series is here: memorable characters, different environments, and familiar sights and sounds. But the problem with those characters is that they don’t have enough uniqueness when they’re playing a round of tennis. Wario might actually be a bit slower and return volleys a bit harder, but we didn’t notice a difference.

Then there is the backstory. Wait, what? A Mario game with no backstory?

That’s right folks. Mario Tennis Open is the story of a bunch of Nintendo characters going to the courts and playing tennis. And that’s it. There are tournament modes and exhibition games, but for the most part, you’re playing tennis. The game could’ve literally been any other set of characters and environments and it would be no different.

There are a few redeeming qualities that Tennis Open has, and the biggest one for us is having the most tolerable 3D experience of any game on the platform so far. That is to be taken with a grain of salt, because the 3D doesn’t actually make the game better, but this is the first time we’ve ever forgotten that the 3D was actually turned on. It didn’t hurt our eyes, but it didn’t really add to the experience, either.

The controls in Mario’s latest adventure (if you can really call it that) are convoluted to say the least. There are six types of shots available to the player: lob, top spin, drop shot, slice, flat shot, and the use-in-all-situations simple shot. The problem is that you can use the four face buttons in certain combinations instead of tapping on the touchscreen, but the layout is different from the touchscreen to the buttons, so it is very confusing if you ever want to switch. To make things worse, the button you should be pressing flashes on the touchscreen when there is a special shot to be made, but it doesn’t correspond to the same physical button, so attempting to watch the screen and mash a button will likely be futile.

The other control scheme you’re afforded with is gyroscopic motion controls. Unfortunately, these make the game virtually play itself, as you simply point in the direction you want the ball to go and your character will run to the shot and make it for you. Of course, you can make the game far easier this way, but you won’t need to, as you’ll see below. The other troubling thing here is that you have to keep the 3DS vertical to use gyro controls, which makes it frustrating if you’re playing in a car or anything that isn’t a rotating office chair.

There is a somewhat decent sense of achievement in the game, if only because you unlock new stuff after every match you play – win or lose. There are a ton of unlockables like gym suits, clothing, and even other characters. Things like POW Block Wristbands and a Wario Suit doesn’t hurt to add a bit more value to the game, but when the main tennis game falls short, there isn’t much that can save it.

Minigames offer a distraction from the main experience in Mario Tennis Open, but little else.

As a Mario-based game, there are always tie-ins with previous Mario titles. For example, in the Special Games mode, you play one of four unique tennis-style games. In one, you have to bounce your ball through rings to earn points while in another, you hit the ball solo against a wall with the original Mario World 1-1 playing on it. There are some unique mini-games here, but they seem like better additions to something like Mario Party than they are in Mario Tennis.

In recent Mario games, we’ve seen a ludicrously easy game become a frustratingly difficult one within a matter of two or three levels. Unfortunately, the same is true for Mario Tennis Open. The first eighty percent of the game or so is so easy, it is a bore to play through because there are four or five tournaments that literally take more time between menus and player transitions than they do on the court. But once you get into the latter couple of tournaments, the difficulty ramps up to a level of frustration that can only be described as Super Mario 3D Land-difficult. Remember that one?

Oh, and the game has multiplayer, but who really plays a Mario game with multiplayer?

Overall, Mario Tennis Open isn’t a huge disappointment, if only because our expectations weren’t really that high to begin with. With that said, however, it would be nice to be pleasantly surprised by a title you just don’t expect to really blow you away. When we walked into Super Mario 3D Land, we didn’t have huge expectations, especially since we weren’t blown away by what we saw at E3 about it the year previous. But it blew our head clean off with its style and gameplay. Then, our hopes were dashed when Mario Kart 7 turned out to be a big flop for us, if only because we hyped it up so much in our heads.

Mario Tennis Open is a solid title if you have to have every game in the Mario franchise and have good old-fashioned fun with the characters, no matter what. If you’re not one of those people, take a pass on this mediocre title.