As we come upon the 50th anniversary of the James Bond franchise, fans of the movies are going to be treated to a new game in the series titled 007 Legends. An interesting concept, Legends is going to mix six movies in the storied franchise into a single game with a single Bond character at the helm.

Even though the game is due out in just a few months, only two of the titles to be adapted – the first and last, actually – have been revealed. The first part of the game will be based on the 1979 movie Moonraker while the last will be based on this November’s Daniel Craig title, Skyfall.

At the helm of this game is developer Steamworks, while Activision is doing the publishing duties for the title. We got a behind-closed-doors look at the game at the publisher’s E3 booth, and the game, at this stage at least, looks very rough.

Upon first glance, Steamworks has created some subtle but good looking lighting effects, but they’re using very low quality textures almost everywhere else in the game. This is a Bond game, and it should look every bit as good as its cinema-based counterpart. Unfortunately, the developers have followed suit with previous games in the franchise and opted for rather cartoony looking graphics as opposed to the hyper-realism we’d like to see.

Character models don’t look great, even after all the time spent modeling Daniel Craig’s face from computer scans from the last game, Quantum of Solace. While the environments look pretty nice, they don’t look like a sixth-year Xbox 360 game and certainly don’t hold a candle to anything else from Activision like, say, Call of Duty: Black Ops II.

Adding fuel to the cartoony-look fire is the joke of a user interface we see on-screen in this preview of the game. It looks far too conceptual and unrealistic in a game where you would expect the on-screen items to look beautiful, especially when the movies have such a crystal clear design about them. 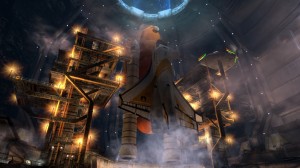 In terms of storyline, there are some interesting tidbits to be had here. Additional missions and side objectives add some more depth to the game, and hopefully some replay ability, but it remains to be seen whether these will add real meat to the campaign or just leave us hungry for a bigger bite of the Bond license.

Steamworks has seemingly adapted some elements from recent games like Splinter Cell such as new gadgets like tranquilizer and distraction darts, the latter of which create a noise that will hopefully split guards up to be taken out one at a time. The former should be pretty self-explanatory.

The audio that we heard was “far from final” according to the demoing developers, and they have confirmed that “a lot” of the voice talent from the original films will be taking part, but we don’t know exactly who that will be at this point. They really better get on that since the game is slated for launch in just a few short months.

Since Legends is set for an October 16th release, the final movie entry in the game, Skyfall, will be released after the movie’s November release as downloadable content so as to not spoil the plot of the latest film.