A few weeks ago, we got a preview of THQ-published, 4A Studios-developed Metro: Last Light. They published an incredible live action short called Enter the Metro which we raved about. 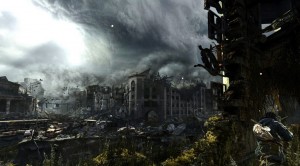 We had a chance to sit down with a couple of the game’s developers and find out more about their new title, and we were absolutely blown away.

We’ll start with a pretty bold statement in gaming nowadays: Metro: Last Light looks better than any other game on the market and any engine currently in development that we’ve seen. Better than Crysis – yes, even the latest one – and better than id Software’s new engine, too.

Every object you see has real geometry to it and nothing has been faked according to one of the dev team members. Textures look stunning while lighting and shadows look photo realistic.

The storyline in the game follows a post-nuclear strike in Russia and there are hints of paranormal activity as well as mutations and aliens weaved through the narrative as well. While we can’t make a solid judgment on the entire story having only seen about twenty minutes of it in our media-only demo of the game, we can hope that as much care has been used to craft that portion of the title as has been used for the graphics and audio. 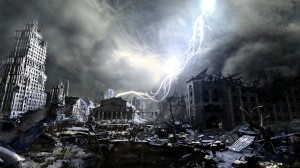 Buildings are, as expected, mostly destroyed in the game, and while this tends to be the style of most games set around a war or ruins, 4A Studios has done the best job with these environments than we’ve ever seen. Nearly everything is overgrown with weeds as so much time has passed since the nuclear strikes, and the mixture of organic and inorganic objects is beautifully complex.

The weather system is said to be completely dynamic, and while that may not be a feat in and of itself, it can be completely random at times. Little things like water droplets falling on your gas mask’s visor are not a new visual feat, but these droplets look completely photo-realistic.

Other elements in Metro are unique as well. Much like in Tomb Raider’s latest reboot where blood and dirt spatters dynamically, your gas mask’s visor will become dirty as you kill enemies in the game. Your visor will become bloody and dirty and you need to actually take a short break from the action – and stop firing your weapon if you’re in a huge ambush – just to be able to see. The fact that it isn’t automatic adds a bit more tension to an already tense game. 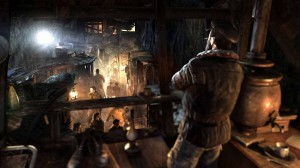 Weapons in the game are something we haven’t seen a lot of yet, but what we have seen is very interesting, to say the least. Metro: Last Light is hardly a game where you wield futuristic plasma rifles or even World War II-esque rifles. Instead, most of the weapons you encounter are very amateurish and hand-made since people have been scrounging around below the surface of the country for so long. They’re very rough in their design, but functional in some very brutal ways.

Audio is another facet of Last Light that has not been overlooked. There is a real sense of creepiness in the game. It doesn’t allow for much relaxing gameplay, but Metro is likely supposed to keep you on a high-flying roller coaster more than treat you like you’re riding the teacups. Even more realistic is the piercing ringing sound you can expect when a shotgun shell goes off right next to your ear, and maybe even moreso how long that sound lingers afterward.

The cutscenes in Metro appear to be in the game’s proprietary 4A engine which means that switching into cinematics shouldn’t take players out of the experience much, if at all, a very wise choice from the developers, in our opinion.

Games like Last Light scream out “delayed! delayed!” just because of how much the developers are trying to accomplish, so while we hope 4A Studios hits their target launch, we have a feeling it’ll be delayed. For now though, Metro: Last Light is targeted for a release sometime in the first half of 2013.