A big surprise coming out of Nintendo America late this evening. In their latest Nintendo Direct video, the company has unveiled the Nintendo 3DS XL, a new version of their handheld console with a much larger set of screens on it. 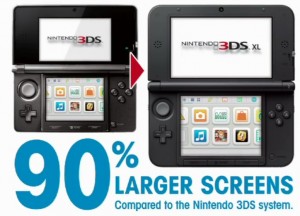 The 3D upper screen is 4.88″, up from 3.53″ on the regular model, and for those keeping track, the size increase will give users a 90% larger screen than the current 3DS, although it’ll be at the same resolution as its smaller sibling.

In order to keep costs down, the new 3DS XL will not include an AC adapter of any kind, which means you’ll have to purchase one alongside your new handheld. This also means not to expect a charging dock as is a pack-in with the smaller 3DS. We are okay without the dock, but if the batteries are not removable, why isn’t Nintendo at least throwing in a cheap USB sort of charging cable or something that somehow gets us to juice this thing up? Your old adapter will work, but we’re not sure it’ll make sense as that is only valid if you’re upgrading your existing 3DS to the new XL model.

Unfortunately, there is only one analog stick on this model of 3DS, and while we just posted our article regarding our E3 predictions, we think this counts as us seeing something both interesting and new in the way of hardware from big-N. We’d still love that second analog stick, though.