We break down our E3 2012 predictions post-show.

Earlier in the year, we posted a couple of articles predicting what we’d see at E3 in Los Angeles this year. The first, posted in March, discussed the games to keep an eye out for at the show, while the second, which went up in May, theorized on the big announcements from the three hardware manufacturers, Microsoft, Nintendo, and Sony. We’ll see how accurate we were with games first.

We didn’t do nearly as well as we thought we would, as games that we thought would definitely be given a demo were absent from the show altogether.

We were in fact right that Tomb Raider, Halo 4, Assassin’s Creed III would be present, but we missed a lot of big titles that had no presence whatsoever. Games like Rainbow Six: Patriots and Mirror’s Edge 2. got no love at all, despite the fact that they’re two pretty big franchises. The fact that Mirror’s Edge 2 wasn’t on display makes some sense as we don’t even know if it is still in development, and Ubisoft likely didn’t want to overshadow their Splinter Cell: Blacklist unveiling with another Tom Clancy game.

We foreshadowed that we’d be seeing Grand Theft Auto V at the show as well, despite Rockstar’s apparent boycott of all things E3, but we were surprised yet not surprised at the same time when they were notably absent. Another oddly missing title was Bioshock Infinite, as Ken Levine himself showed it off last year at Sony’s press conference.

Perhaps the biggest shock is that The Last Guardian didn’t even get a cursory mention from Sony at their conference, nor on the show floor, as the game had recently been confirmed as still being in development, and we had word that it would actually be shown off in Los Angeles.

In terms of what we predicted to see from the big three companies, we posted back in May some pretty unusual stuff, so let’s see how well we did.

On the Microsoft front, we predicted Halo 4 would make an appearance. To be fair, that wasn’t a huge shock as the release date for the game came just a few weeks before the show, and we all knew it would be a huge game. What we didn’t know was just how much we would end up loving the demo they did put on. Take a look at our impressions of the game for more.

We had a feeling we’d see a new Splinter Cell title at the show, and sure enough, that followed up the Halo demo. Another surprise and delight for us as that game also turned out looking fantastic.

Wreckateer was certainly interesting, but didn't blow us away.

We predicted not seeing a new console from Microsoft, though we’re pretty sure everyone else expected one (even after the folks in Redmond said it wouldn’t happen).

Rather than seeing a whole bunch of sequels (or “requels” as we called them), we saw some new IP with the likes of Tomb Raider giving a phenomenal demo on stage. We did expect a lot more time to be spent on Kinect-based titles, but once Wreckateer and a little sprinkling of Kinect was added to some more traditional titles, we were spared the kids flailing about in the living room. We were glad to be wrong on that one.

Of course, Microsoft ended off with Call of Duty: Black Ops II, so perhaps there were more requels than we’re letting on to, but the quality of the titles shown at the show were all exceptionally high, so we can’t complain.

Sony is the group that just blew our predictions right out of the water. With the exception of delivering more content with PlayStation Plus – not to mention sucking up to us by giving us all a free year of it – Sony didn’t really do anything we expected.

As we mentioned, we didn’t see a single lick of The Last Guardian even though everyone expected it to finally be at the show again. There was nary a mention of any new hardware except for a white Vita bundle that includes the portable version of Assassin’s Creed III in the box. And we certainly didn’t see a tech demo, let alone any PlayStation 4 hardware, although we’re pretty sure they had something ready to go in case Microsoft did in fact announce their next Xbox at their press conference mere hours earlier in the day. 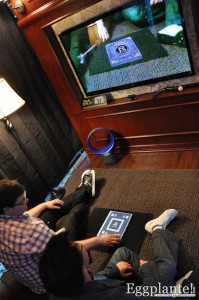 A new way to merge AR, Move, and the PlayStation Eye.

We did see some interesting new uses for some existing tech, like merging the PlayStation Move with augmented reality in Wonderbook. But we can’t really count that as new hardware, so while it was neat, it doesn’t count as a fulfilled prediction on our end.

The last of the big three was Nintendo, and they were kind of a mixed bag when it came to proving and disproving our theories about what we’d see this year. Obviously, we saw a whole bunch of Wii U content and new, finalized hardware. We liked the circle pads on the original prototype GamePad, but having clicking analog sticks is certainly a step up from that.

Some serious games were also shown off, including Mass Effect 3 and a rehashing of Batman: Arkham City, even if those titles will have been out for over a year by the time they launch on Wii U.

Beyond that, we were kind of dead wrong on everything else. We didn’t see much 3DS content hat we didn’t know about, even if you include the second press conference dedicated to Nintendo’s handheld gaming efforts. We didn’t hear about anything in the Smash Bros. realm of gaming, either, which worries us as we thought it would certainly be a launch title for Wii U, Miyamoto coming out and explaining that they had in fact been working on it far longer than they originally let on.

Nintendo also failed to impress with any big surprises of anything awesome. We didn’t get any pricing details or launch date for the Wii U, and while that makes sense because they wanted to gauge the audience’s reaction to the official final unveiling of the console, we’re not sure it was the smartest move. Nobody really saw Nintendoland coming, and while it is certainly unique, we’re not sure it’ll have the lasting impact we’d like to see from a company as seasoned as Nintendo.

Overall, our predictions were in line with about half of the conferences we saw. We were dead on with almost everything Microsoft presented, about middle of the road with Nintendo, and dead wrong with almost everything from Sony. We like being surprised, but we feel like this year, our predictions coming true would have made this a lot better show. Did everyone drop the ball, or are they preparing for some big unveilings outside of E3 this year. Perhaps they’ll all announce something major in August when they’re ready to, but whatever happens, we know that our E3 predictions this year, will forever remain, for the most part, wrong.