Is the power of your PlayStation Vita just not enough? Maybe you want to take your Xbox 360 on the go? Now, you actually can.

A company called GAEMS is making it possible to really have an Xbox Portable to take your Halo and Gears of War on the go with you. Their product, the G155 Sentry couples a secret agent-style hard case with a 15.5″ 720p screen and all the necessary connections for your Xbox 360. Oh, and it all fits in a (rather large) briefcase that you can take anywhere with you.

We spied the G155 Sentry at E3 2012 where we were blown away. Usually, this stuff is awesome concept technology that is far too out of reach to make the product worth anything more than an interesting concept. But the G155 Sentry actually makes a lot of sense.

First off, it becomes ten times easier to take your electronics with you on a long trip. For us video game reviewers, it makes life a bit easier if we need to be away from our television for a little while. And for students, it gives you the power of an Xbox for your DVDs, gaming, and streaming content without taking up a ton of space in your tiny hole of a dorm. 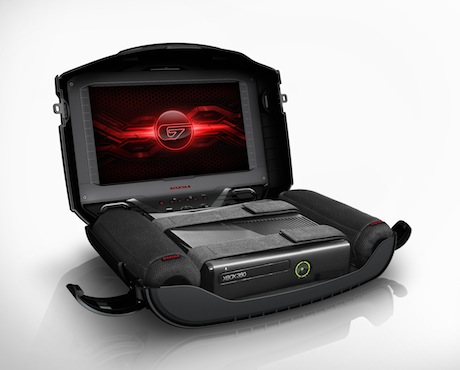 You’ll need to plug in the power for the screen and the Xbox (or PlayStation 3, by the way) separately from the screen, but if you carry a little two plug adapter with you wherever you go, you should be all set. Best of all, the G155 Sentry actually comes with a short HDMI cable, carrying pouches, and the power supply you need to get everything going. You supply the Xbox and get to gaming.

Did we mention this thing is a licensed Microsoft product? Yep! It has been designed to hold the Xbox 360 Slim and skins and cases featuring your favourite games from the console are currently in the works.

GAEMS is planning a 19″ model – the G190 Vanguard – for a 2013 release, although a specific date hasn’t yet been nailed down. Take a look at GAEMS’s website at www.ProjectGAEMS.com and sound off in the comments below if you think the G155 is awesome or something you’ll just never use.

We’re hoping to have a review unit within the next few weeks and we’ll have more for you when we have the chance to play around with it.