We’ve known about the next episode in the Halo franchise since E3 2011 and it’s surprise unveiling at Microsoft’s Media Briefing. This year, we got a whole new look at not only the multiplayer experience, but also a small taste of the single-player campaign. 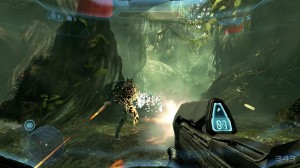 Our first impression of the game after we had seen it at this year’s presser was that 343 Industries has balls, and there’s no two ways about that. In one sense, they’re continuing the Halo series as we’ve come to know and love it, but at the same time, they’re changing the gameplay and adding things to it to bring it into a new era for the franchise.

First up, the single player that we saw at Microsoft’s Media Briefing this year. The level starts out with some classic Halo live-action footage, and then switches to in-game and human-controlled gameplay. We get a super short glimpse of the Covenant, and then an Elite is taken out by something mysterious. We then see a new species, now known as the Prometheans, and this is where 343 Industries has begun to make major changes. 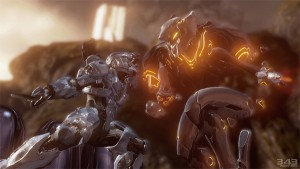 Prometheans are the new major enemy in Halo. While we don’t know much about the human-Covenant relationship in this game it is clear that the Prometheans are the new big baddies of the series. They’re actually made up of artificial intelligence and are non-carbon and inorganic life forms. We’re not actually entirely sure how they’re even “alive”, but we assume that’ll be revealed as the storyline gets fleshed out in the game.

The graphics in Halo 4 are nothing short of gorgeous. The environments are super bright and very richly colored. The engine being used appears to be completely different from the previous games in the series as there is a brand new benchmark being set for detail and design in this Halo.

Audio is another part of the equation hat 343 clearly hasn’t skimped on. As the caretakers of the franchise, and now the full-fledged developers of it, they’ve gone to insane lengths to get brand new, high-fidelity audio for their new game. There have been reports of recording audio in India and Africa and changing or re-recording over 95% of the game’s audio for its latest entry.

Multiplayer is a new thing entirely. In all honesty, we’re not completely thrilled with the new direction it has taken. A lot of people have been calling Halo 4‘s new multiplayer gameplay the “Call of Duty-ification” of the franchise. And we tend to agree.

On the one hand, this is the Halo you know and love regarding overall gameplay style and function. But there are some new scoring elements and gameplay perks you get that change the classic Halo experience into something new. For example, scoring is no longer based solely on the number of kills, but rather on the way someone is killed. Just like Call of Duty multiplayer, you are scored based on whether or not the kill was a headshot, during a streak, and so on. Gone are the days of “one kill to win”, and upon us are the ones of “thirty points to win”. Those thirty points could be six assists, five kills, or a single headshot.

Other mechanics seem to have been altered as well, such as the grenade throwing mechanic. This is likely to translate into the campaign, and truthfully, things like this just alter the experience rather than make it worse, but it is a change to the Halo feel we’ve become accustomed to.

It’s certainly not all bad, however. Halo 4 retains the beautiful gameplay style we’ve loved for years, and while there are some minor changes to gameplay, we have never been this excited to play a new entry in the series. Coming out of E3 2012, we’ve got more confidence in 343 Industries than we ever had as the developers of this franchise. They’ve got the cojones to make changes, and the ability to know where to stop changing things.

Halo 4 launches on November 6th, and you can bet we’ll have a full review of the game and it’s multiplayer gameplay when it finally graces us with its presence.