If there’s one game series that epitomized childhood, it was id Software’s Commander Keen. Commander Keen: Marooned on Mars, the first game in the series, stars Billy “Commander Keen” Blaze, an eight-year-old genius, an all-around cool kid and, believe it or not, the grandson of William Joseph “B.J.” Blazkowicz (the main character in Wolfenstein 3D). While exploring Mars, aliens known as Vorticons steal vital parts from his ship and hide them in their Martian cities.  Keen must find all the stolen parts if he plans on returning home before his parents find out.

When id created Commander Keen I don’t think they knew what a success this DOS game would eventually be. In fact, it did so well, several sequels were later released, continuing the comical journey. Commander Keen wasn’t a part of my childhood, but after playing it for the first time I could see exactly why a game like this was so near and dear to children’s hearts.  For its time, Commander Keen was a fresh new take to the platformer genre, replicating the side-scrolling action of popular NES games like Super Mario Bros., while successfully developing its own identity in the process.  It was a game that let children explore the depths of their imaginations, letting loose on an adventure of a lifetime.

Commander Keen consists of several levels in which you must find key cards, equipment and the four stolen items.  There are tons of other items to find on your journey like soda cans and lollipops, but those are just to up your score when you beat the game.   Honestly, getting everything in the game is challenging, and not really worth your time unless you want a high score.  Even the slightest misstep can kill you and with such few lives it’s safer to take it easy and have fun with it. 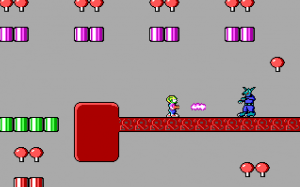 The platforming might seem easy enough, but it’s much harder than it looks with its fussy controls.  Jumping is one of those things you slowly have to master while playing the game.  Pressing the key too light will seem like nothing more than a hop while pressing the key too hard will send Keen soaring.  Finding a balance between these two isn’t easy, but with a little practice and patience jumping becomes easier and easier to control.

Another problem for many was firing your pistol.  When doing so you have to press two keys at the same time, one of which is also the jump button.  Since there’s so much jumping to do in this game, you could accidentally shoot your pistol instead.  That might not seem so bad, but with a very limited amount of pistol ammo available in the game, moments like those can get more than just a little irritating.

Amidst all the jumping and zapping, the one thing I wish the game did have was a soundtrack. It’s not the worst thing to happen, but it would have been a nice addition if they had the space to include it.  At least this way we get to enjoy the game’s stage design and colourful palette.

Commander Keen may have had a simple plot, but that didn’t stop it from having such fun gameplay.  There’s definitely a high risk, high reward involved in gameplay, but that’s usually not too much of a problem with some perseverance. Commander Keen: Marooned on Mars is a challenging platformer that still lives up to its name, even after all of these years.