If you checked out my last review, I paid homage to a very popular and important adventure game by LucasArts, Maniac Mansion. I had so much fun revisiting this game I couldn’t help but write a review for its sequel Day of the Tentacle, an adventure game I had actually never previously played.  Co-led by Dave Grossman and Tim Schafer, their first foray in lead game development turned out much better than anyone would have expected.  Regardless of whether or not you’ve played Maniac Mansion you need to try out Day of the Tentacle, although I’d advise you play the original just so you can experience all the inside jokes this game plays around with.

Day of the Tentacle begins with Purple Tentacle, one of Dr. Fred Edison’s brainchildren, taking a sip of toxic waste.  For whatever ridiculous reason, this gives him a deep sense of world domination and a couple of stubby arms to go along with it.  That’s when things start to go bad, and in a really good way.  We’re reintroduced to Bernard Bernoulli, the all-around geek from Maniac Mansion, and his crazy friends, laid-back metalhead Hoagie and skittish, slightly delusional, anatomy enthusiast Laverne.   The three head to Dr. Fred’s mansion to investigate the situation and find themselves in a whirlwind of a plot where they must bend time and space in order to save the world.

That, my friends, is an amazing plot, and one I wish I could experience more often in video games.  Day of the Tentacle constantly pokes fun at itself and LucasArts as a whole, and entertains with its bizarre and goofy story.  Similar to Maniac Mansion, it’s like you’ve just stepped into a cartoon world where things don’t necessarily need to make sense. 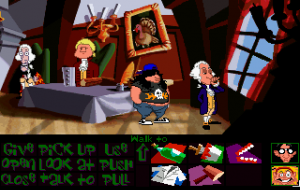 With each character in a different time period — Bernard is in the present, Hoagie is in the past and Laverne is in the future — its up to the three to solve SCUMM-based puzzles to stop Purple Tentacle and change the future as we know it. Each top-notch puzzle is distinct to the character and setting and are often a little on the bizarre side, but each are creative and interconnect between time periods. Not to mention, the game is full of hilarious dialogue and kooky characters to deal with, there’s never a dull moment.

The graphics are another feature worth mentioning, with its unique, cartoony style.  A lot of attention was clearly put into every environment in this game, whether it’s the particular colour of the checkerboard floor or furniture layout in a room.  Once I booted this game onto my laptop I was surprised by how well the graphics still look today.  It emanates a sense nostalgia even if you’ve never played it.

Day of the Tentacle succeeds in the sound department as well, exploring a bizarre, animated whimsy.  The same can be said about the talented voice acting as well, which really pushes the limits for its time.  Each voice actor was able to portray each character in a fitting and unique way without ever feeling overdone. Sound effects, on the other hand, could have used a bit more work and were oftentimes overused.  It was a little disappointing considering how much detail was put into the rest of the game, but it never becomes a big enough issue that it hindered my experience.

Day of the Tentacle is a nice alternative to the game’s we’re used to playing.  Its silly plot and colourful characters are entertaining, offering a sense of nostalgia akin to all of the best 90’s cartoons.  There’s no sacrifice in intelligence either with clever references and challenging puzzles. This game may not be for everyone considering its bizarre premise and equally strange puzzles, but it’s at least worth a look. Charm is the key facture here and Day of the Tentacle has got it in spades.