When we played the original Darksiders, we weren’t expecting much. It was a game that a lot of people had talked about, we had seen at E3, and it seemed to be getting some buzz, but it never really captured our attention. Until we played it. Mind you, it wasn’t the best game ever – it had its problems – but it reminded us to play each game with a fresh mind. 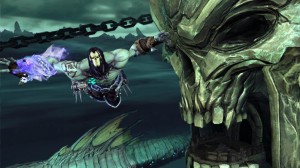 Fast forward two and a half years to our saviour of the usual summer gaming lull that we’re experiencing and enter Darksiders II. In short, this game is just damn fun.

It’s a bit of an odd title, people calling it a mix between The Legend of Zelda and God of War, but that’s exactly what it is, and it delivers wholeheartedly. As an action-RPG, the development team at Vigil have really focused on the action (you play Death, after all), throwing in some RPG elements where necessary, but never really bombarding you. The game feels like a platformer in the beginning, somehow not dissimilar to the Fable series, yet it oddly changes into a much more robust game later on.

As you progress, you’ll notice a lot more dungeon questing, not in the same way as World of Warcraft, but closer to something you’d have found in Skyward Sword. It seems like every game gets a comparison to Zelda nowadays, but this is one that genuinely deserves it. The gameplay style doesn’t exactly match Nintendo’s series though, as that borrows more of a hack-and-slash mechanic from games like God of War or, dare we say, Ninja Gaiden.

Darksiders II seems to be very much inspired by Blizzard Entertainment’s style of design wizardry. You’ll see some very Warcraft-esque creatures and battle with some very Diablo-esque fighting mechanics. And while Darksiders II does manage to borrow from a lot of different games, it borrows the best bits and only does it sparingly, so the title never feels like a compilation of features from other games.

The graphics in the game are a bit hit-and-miss for our tastes. Make no mistake that this game has a lot of enemies on screen at once and artists have used quite the liberal hand with special effects, and given that the power of these machines isn’t infinite, the game still looks damn good. But something is missing in the overall finesse between in-game graphics and the cutscenes that make us wish Vigil had spent just an extra month or so tightening up the graphics here and there.

Gameplay mechanics is where Darksiders II really outshines almost anything we’ve seen this year in gaming. There is such a massive amount of love given to the level design in this game that it oozes with eccentricity. For a game that is as heavily based on action as it is, there are such well designed puzzles in it that it puts most games to shame in that respect. Most of the puzzles were genius, playing with elements like lighting instead of just the square goes into the square hole style puzzles you might be used to in more simpleton action-RPG-puzzle titles (if that’s such a thing).

Some of the creatures your end up fighting in Darksiders II are just ridiculous. They’re so fantastical and well designed that you don’t know if you’re looking at something out of ancient folklore or something brand new designed to fit right into this bizarre yet beautiful world.

Audio in the game is also stellar, to the point that the voice overs in the opening cinematic right through the finale of the game are some of the best crafted audio pieces we’ve ever heard in any title. Ever. That opening scene does bug us a bit if only because it isn’t in-game graphics or cinematics, but rather a cartoony depiction of the events prior to the game you’re about to play. It seems like everyone is doing something like that nowadays in gaming, and it’s getting a bit tiresome, but realistically, if that’s our biggest gripe with the game, then Vigil and THQ have created a winner.

And with Darksiders II, they certainly have.