Nintendo has this habit of iterating within console generations. They only really do this with their portables (we never saw an updated GameCube or Wii), but the updates come almost like clockwork. A new product is announced (the DS or 3DS, for example), and a year or two later, an update is produced (the DSi and 3DS XL, respectively) which marginally improves the product to hopefully breathe some new life into it.

The marginal improvement Nintendo has made this time around doesn’t really buck the trend, but the improvements that big-N have made are more than welcome, if not a bit uninspired. 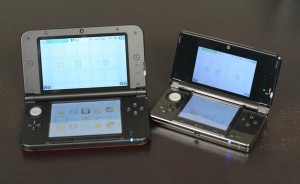 The 3DS XL is something everyone joked about yet never thought would actually come. The platform is still in its very early infancy, and the technology it has brought along with it still hasn’t been fully embraced. However, Nintendo felt the need to nearly double the screen size of its latest portable. The problem we find with that is that the resolution hasn’t been changed, which means the pixels in the display are massive.

We know, we know, how could Nintendo have really upgraded the resolution of the screen if previous games weren’t written to take advantage of the higher resolution screen? Well, just like the Game Boy Color (GBC) would support pre-GBC cartridges, the 3DS XL could have been written with pixel-doubling firmware built into the operating system that would just enlarge existing games, while new ones could be developed at a higher resolution. No, it still wouldn’t look as good as the Vita’s incredible 5″ OLED screen, but you’d be a hell of a lot more immersed in the game if it didn’t look quite so pixelated.

While the screen is the most obvious and certainly biggest change to the handheld, there are some other minor hardware tweaks Nintendo has made. No, there still isn’t a second Circle Pad built into the unit, but that is because past games would suffer the same issue as the higher resolution screen games would, had it been implemented. Either way, rumour has it that Nintendo is going to be releasing a Circle Pad Pro for this behemoth, making it an even behemothier behemoth.

The Circle Pad itself has been changed, however, and it feels somehow grippier and smoother at the same time. The Start, Select, and Home buttons have also been changed from the bubble-like buttons on the original 3DS to more traditional push buttons. The whole system has been given a matte black finish on the inside (along with either a red or blue shell), which is great for those people who like fewer fingerprints on their devices (pretty much everyone on the planet). 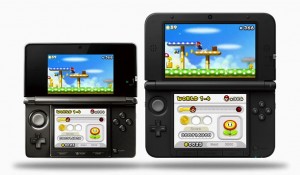 The device is a bit clunkier to hold, and since the size has grown quite a bit, the weight has ballooned along with it. The 3DS XL is clearly heavier than the original (by almost 45%, in fact), but since there is a lot more surface area, the weight feels more even across the device. That doesn’t mean you’ll be less tired this thing, though. It is still quite the beast.

Beyond these changes, there isn’t a whole lot that’s new with Nintendo 3DS XL. On the one hand, we wish there was more of an improvement, but on the other hand, we realize that this isn’t supposed to be a brand new console. We will be getting more great first-party titles including the likes of Luigi’s Mansion: Dark Moon and Paper Mario: Sticker Star, in addition to third-party titles like Epic Mickey: Power of Illusion.

Going back to a regular 3DS after playing around with the 3DS XL is kind of a mixed bag. It isn’t nearly the huge step down that we thought it might be. On the one hand, the XL’s larger screen is great when you’re playing massive games like Ocarina of Time 3D, but doesn’t make as much sense when bouncing on a Koopa in New Super Mario Bros. 2. The smaller 3DS is also a heck of a lot more portable, and the smaller screen does actually make the resolution far more palatable.

It is very easy to say that if you’re already rocking a 3DS, the XL probably isn’t worth the hassle of upgrading. However, it’s a tough call to say which 3DS to pick up if you don’t have one yet. Our money would probably be on the 3DS XL, if only because we have a thing for larger screens, but we certainly wouldn’t be disappointed to get a standard 3DS, either.