It is no secret that we have always loved Halo. But our fanaticism and outright love for the game isn’t because it is just an awesome game, but because of a few key things that Halo has that we just never grasped in other games. So we thought it might be of interest to see just why we’re so emphatic about the game at the top of our Top Ten Games of All Time List. 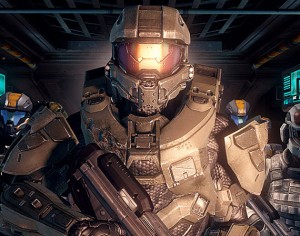 1. Graphics – This is a pretty rudimentary reason that a game can be considered “good”. Arguably, Halo paved the way for clean graphics with the (then) next-generation console and Microsoft’s first foray into the home gaming market, the original Xbox. Of course, every game since that one has looked nothing short of stunning. There is also the flip side to the argument, where Halo games don’t look nearly as good as others in similar genres, such as Call of Duty. Then again, Halo isn’t going for the super-realism design paradigm as much as it is something that looks incredible, runs great, and doesn’t have pop-in like the abomination that was Halo 2.

2. Gameplay – “Take thirty seconds of incredible gameplay and repeat it over the course of a game and you’ll have put together an incredible game.” That was one of the design philosophies of the first title in the series, Halo: Combat Evolved. It was a paradigm that worked in the end, because each of the games has had something unique to call its own from a gameplay perspective. The original game introduced the now-famous ring world, Halo 2 gave us the ability to dual-wield weapons, Halo 3 gave us new worlds and finished the story of the cliffhanger we call Halo 2, and ODST showed us how the story can change gameplay entirely, while Reach provided us with armour abilities and space flight. All of these components combine to create some of the most immersive and deep gaming we’ve ever had the opportunity to experience. And in a shooter. Wow.

3. Love – No, we’re not talking about the passion that Bungie and 343 Industries have for creating their masterpieces (although, don’t get us wrong, that is certainly there). We’re talking about the rich relationship Cortana and the Chief have over their time on various Halos and other planets. Yes, it may sound (ridiculously) corny, but this relationship is a big part of why the overarching Halo narrative is as functional as it is. Without the complete contradiction of war and destruction that we find in the love and trust between Master Chief and Cortana, Halo would be that much closer to any other space marine shooter.

4. Audio – We’ve said it before and we’ll say it again: audio can quite easily make or break a game. Great sound effects and audio engineering won’t automatically give a game a perfect score, but poor audio will almost always tank a game that would have otherwise been above average. The team at Bungie handling the audio (namely Marty O’Donnell) has always been stellar at putting together incredible pieces to really bring the character into the mood that the designers were trying to convey. With a title like Halo 3: ODST, the developers proved that audio can be such an important component when visuals are not the only main element of the game. Incredible audio production is an absolute must. With every game in the series, we’ve found ourselves remembering melodies and emoting to hearing similar themes from one game to the next. This kind of detail is why we write articles like this.

5. Emotion – Halo is a space marine shooter. It has grenades, guns, and big bad purple aliens to fight against, not to mention the nasty Flood we encounter more than a few times. Yet Halo is very likely one of the best games to make someone feel for a character. Again, Halo 3: ODST did an incredible job at this, but so did Halo Wars and Halo: Reach. At the end of these games (spoilers ahead, but if you’re reading this far ahead, you better have played all the games by now), whether it is Cortana that needs help, or the Chief taking a much-deserved break, you feel for the characters on-screen and can’t help but somehow be connected to them.

6. The World – There is this seemingly persistent world that Bungie and 343 Industries have created for us. Unlike most other games, when you turn off the console after a level or two of (campaign-mode) Halo, there is a sense that there is still something living within the console. A world that could exist beyond our controllers.

7. The Future – Are we as humans the Forerunners? What sort of ancient race is this that the 2552-era humans have discovered? Probably the biggest reason Halo captures us so much is that it is somehow possible. The game takes place over five hundred years in the future. Is it possible that we’ve developed massive spacecraft and have colonized other planets by then? Our take on it is yes, it’s absolutely possible. And in the meantime, have we formed one massive government to defend the species rather than fight among our countries and governments within? As farfetched as it sounds now, yes, I think we will have done so. And so Halo is not only a game, but a way to look forward to what we should become as humans.

Halo 4 is due out in less than two months from now, and we have to say we’re more than a little excited. It seems the job that 343 Industries is doing is on par, if not above the work that Bungie put out in its five-game run of the Halo franchise. IGN has compiled all of 343’s video documentaries onto one page for your viewing before you pick up your copy of Master Chief’s latest adventure on November 6th of this year.