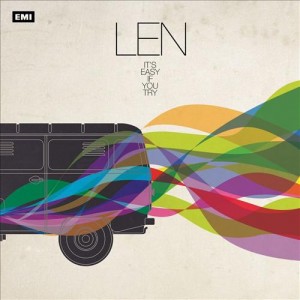 Canadian pop-sensation of the 90s Len are back with a new single over a decade after their original one-hit-wonder hit, Steal My Sunshine, destroyed airwaves in 1999.

Their new tune, It’s My Neighbourhood features some iconic Toronto landmarks, as well as beautiful shots of people in Yonge-Dundas Square, Toronto Island and Billy Bishop Airport, as well as a collage of street signs from our beautiful city.

The duo’s (they’re brother and sister, actually) goal this time around is actually not to sell as many records as they can, but rather to put out an album “because it feels good.”

Their 1999 album, You Can’t Stop the Bum Rush sold about two million copies and it features some pretty big names in the Canadian music scene, including BC’s Moka Only. We still listen to the album today in fact, as Steal My Sunshine is still one of the most bizarre yet awesomely entertaining songs on the planet.

Len’s new single can be found on YouTube and across the web as their album dropped October 16th, and you can of course check it out below as well. How many Toronto landmarks can you spot?