The back of the box of 007 Legends says “Live the legend and relive the world famous spy’s most iconic and intense undercover missions.” Boasting incredible missions – “most iconic and intense,” remember – from Goldfinger, Moonraker, Licence to Kill, Die Another Day, and On Her Majesty’s Secret Service, in addition to some extra missions about Skyfall to be unlocked after the movie has been released in theatres, you would assume the game to be rather good.

When we saw 007 Legends at E3 2012 this year, our impressions of the game left us less than enthusiastic about the title. The game takes place in one of our favourite fictional worlds (five of them, actually) and stars our favourite James Bond in the series, Daniel Craig. But that’s precisely where the game falls apart. We’re okay believing that James Bond is actually just a codename for a secret agent and that Bond is actually whoever MI6 gives the title to. So yes, it is conceivable that Daniel Craig’s Bond was also Connery and Moore’s Bond. But why, when you’re giving us five movies to play through, would you ever give us the same Bond in all of them? Why are you messing with the series like that?

Continuity might be a reason that the games developers might choose a single Bond, but that excuse goes out the window when you realize that these missions have nothing tying them together whatsoever. The opening sequence of the game is the train sequence from one of the trailers for Skyfall, due out in November. Then you wake up in an apartment seemingly in the middle of Goldfinger with your lady friend dead on the bed. An iconic scene, sure, but you then begin to play your way through a part of the movie that we had to watch again to even remember it was there.

Of course, from that movie, we get to see Bond act in the same sequence from the movie in which Auric Goldfinger says, “No Mr. Bond, I expect you to die!” Yet the voiceover actor couldn’t get the accent or the tone of voice quite right. You’ve already got the license to the Bond franchise, do you think it would have been a big problem to just copy the audio from the movie into the game?

Throughout the game, you get XP points popping up all over the place. We can fathom a guess at how they work, but there’s just no explanation or hint as to what they actually do or how they change the game experience for the player.

There are other bizarre design choices regarding level design that just don’t make any sense either. Within the first hour of the game, we found ourselves in a pretty massive firefight with very little health and no easy way to replenish it. We had fought through two waves of enemies and moved up a few barricades, only to die about thirty minutes in. Assuming we’d start at the last barricade, we continued playing. We were actually sent all the way back to the beginning of the fight and would have to get all the way through that scene again. Needless to say, we stopped playing out of frustration, and that is one of the worst things a game can do to a player. A developer’s goal should be to keep someone playing, not give them reasons to stop.

Now, as odd as this might sound coming from the last five paragraphs, Legends isn’t all tragic. There are a few neat gameplay elements that save the game a bit from its cheesy moments. There is an interesting puzzle mechanic when hacking some keypads and computers which require you to match your trigger pulls to some graphics on-screen. It’s not entirely new, but it is something we haven’t seen quite in this way, so it’s nice to know the developers and designers took some care in crafting unique puzzles, if you can call them that.

Probably the best part of 007 Legends is the game’s audio. It is really a treat to have Judi Dench actually voice M while Daniel Craig does the voice acting for James Bond himself. We want to fault some of the audio for being a bit too easy – pretty much all the music has been written for decades at this point – but we’ll be a bit lenient because the audio was executed really beautifully.

Graphics aren’t horrible, either, although there are some issues in some of the more futuristic-looking levels where everything tends to look one shade of grey or blue. These are minor gripes though, as the game has some pretty advanced lighting and shadow effects when you consider that the rest of the game doesn’t look particularly gorgeous. If you don’t know whether thats a compliment or an insult, that’s okay; we’re not sure, either. 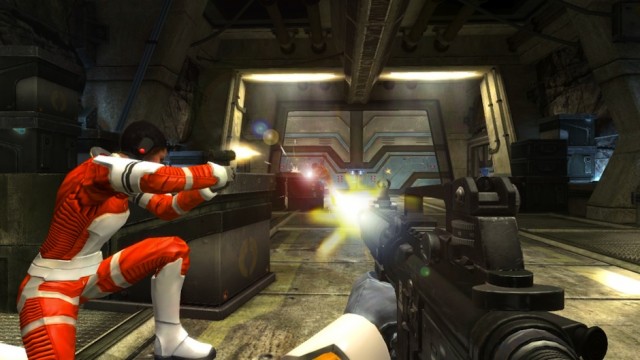 Realistically, we wouldn’t be so hard on this game if it didn’t pretend to be the best of all the Bond films. If this was a different franchise with a different coat of paint, we might actually be a bit fond of Legends. But the fact that we know Goldfinger and Die Another Day, for example, have no real connection and take place decades apart takes us right out of the experience.

Unfortunately, the fact that it is a Bond game means that it has a higher bar to reach for, and it just doesn’t make sense that the game is not up to the par of the moniker it bears.