The Unfinished Swan is a beautiful, serene game. You exist as Monroe in a storybook world where seemingly anything can happen. 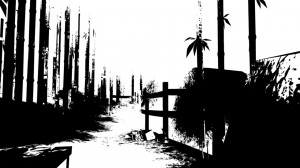 The game begins as a small tale and ends up evolving into one boy’s quest to finish the painting his late mother left him. It’s not an easy game to describe, actually, despot its simple premise.

You hurl balls of paint – and later, water – at your barren world, uncovering its objects, walls, and boundaries, as you discover your environment. You can climb and jump, but that’s about it. You have no hands or feet, no heads-up display, and no bearing until you release your paint.

From its description, it seems like an interesting concept or a way to prove some unique surrealism in gaming is possible, but The Unfinished Swan is actually a masterpiece.

The game actually has some of the most interesting gameplay elements we’ve ever seen. At one point, your paint becomes water droplets you throw around, and as you do, vines creep up to absorb the water. You paint along a wall or the underside of a bridge to feed the vines, and they begin growing so that you can climb them and extend your reach to other parts of the world. 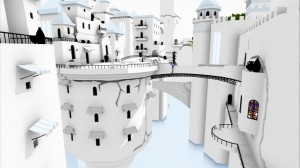 Colour and shadow also make their way into the world despite developer Giant Sparrow’s desire to only show us the first ten minutes or so of gameplay, all of which occurs in a stark white environment. Despite the colour and shadows that we do see, the world remains remarkably plain and rudimentary, yet somehow, when you jump from a death-defyingly high ledge to the ground below, you feel a very real sense of falling. It’s quite terrifying, and something about it not being all that realistic makes it feel more realistic.

The game reminds us of Mirror’s Edge in a way, such that the world has pops of a single bright colour at very key moments, and the game’s story seems to question something very basic about our existence. We won’t give it away because The Unfinished Swan needs to be experienced, but keep in mind that you’ll be questioning some of your life when the game is through.

It will be through in a jiffy, though, as Swan isn’t exactly a long title. You can have a seat and play through the entire title within about two hours or so. But that is as it should be, because the game is intentionally designed to be re-consumed. The Unfinished Swan is a children’s storybook, remember, so it should be read often, its lessons always in the back of your mind until you rediscover the world.

About halfway through the game, it becomes beautifully dangerous. Rather than being in a sea of white, everything becomes pitch black except for the night sky and some glowing orbs you must move by hurling paint at. There exists some very eerie spider-like creatures, although what they actually are remains unknown as they never quite make it into the light. The stunning game, for a few moments at least, becomes a survival horror, chilling us to the bone at the mere thought of something jumping out at us, whether it did or not. Serenity quickly fades and is replaced by fear.

There are other game mechanics which need to be seen to be understood as well as shouldn’t be ruined by our review of the game. We’ll say this: you create the world at certain parts of the game, and much like our choices have consequences, in a very basic sense, The Unfinished Swan makes you create your path through life, although the game gives you more than one chance to get it right. If only life were as simple.

The Unfinished Swan could be a portable game, but it deserves to be experience on the big screen because doing so epitomizes just what the game is: a small simple existence with big consequences in a huge world.

Perhaps the most important thing about this game is not the game or its unique mechanics at all. It’s the story. That is probably cliche, yes, but we employe you to finish this game and hear what it has to say about life and creation. We are only as strong as the earth and universe itself, and we will all be gone one day. But we must create, no matter what. We must innovate. We must progress. Because without it, we live in a world with nothing.

The Unfinished Swan is an absolutely stellar game, but an even better life lesson. If you are willing to listen to what it has to say, it really does have the power to change your perspective on life.