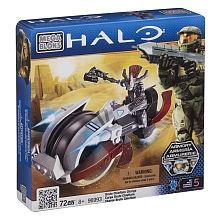 To celebrate Halo Mega Bloks Toymation Contest 2012, we’ve teamed up with the folks at Mega Bloks to give away an awesome Halo figure from the collection.

The rules of the contest are simple: head on over to the contest’s homepage and cast your vote for your favourite Halo Toymation video. You can actually vote for as many videos as catch your attention, but you can only vote once per video per round.

From there, we’ll select the winners at random who will each get the Halo figure.

So what is this figure we’re giving away? We’re actually giving away two! Mega Bloks sent us two Brute Chieftain Charge sets (number 96993 for those keeping track), but we built one because we couldn’t resist (yes, it’s that awesome)! So we went out and got another one, and now we’ve got two sets to give away.