In one of the rare instances of game companies not completely overdoing a popular series until it explodes in a fiery death, Activision managed to cancel Guitar Hero 7 in 2011. 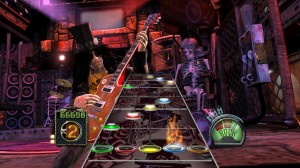 The game was originally planned as a guitar-only title, doing away with drums and bass, and microphone gameplay, reports Kotaku. However, with a less than stellar track list, even at over 80 songs, “they [Activision] realized that, with our lack of budget of time, they couldn’t get quality music so they bought bargain-basement music like ‘Closing time’ and ‘Sex and Candy.’ There were some songs in there that had been used at least three times in GH franchises before.”

There was reportedly some change from the first six Guitar Hero games, including an evolving stage environment that would change based on the change in music being played.

Hardware changes also included the move to a six-string setup for the guitar, as opposed to a digital strum button, as well as a sixth button on the neck to add more challenge over the previous games.

Under development by Vicarious Visions, Guitar Hero 7 (or whatever it was to be called when released) was reportedly a “disaster.” Games from Vicarious Visions tend to be very well designed and developed, so it’s unclear what part of the game was actually such a disaster. Gizmodo reports that the studio does tend to overreach with game development to push itself, but perhaps it just got the better of itself this time around.

Interestingly, Guitar Hero 7 was marked as the biggest change in the franchise since the game’s original. It isn’t often that games get cut when they try to realize a new design dynamic and change up a franchise. Then again, it could have appeared to Activision that a radically different game would be a bigger risk than staying true to the original gameplay.

Hardware is also another huge facet of Guitar Hero gameplay mechanics, and it is said that the new guitar was extremely costly to make and that the quality just wasn’t up to snuff. We’ve played around with guitars for Rocksmith and they’re not Les Pauls or anything, but they’re still pretty great quality, and at $200, about the same price as GH games that came bundled with guitars.

It isn’t completely out of the question that Guitar Hero will return someday. Heck, it could even happen as early as next year. We’re not sure the world wants another rhythm game, but the timing for a new one is critical. If Harmonix decides to announce Rock Band 4 even a week or two after the new Guitar Hero gets real, it could be seen as a copycat move and just waiting in the wings for Activision to strike first, judge the reception of another rhythm game, and decide how to proceed from there.

Then again, it has been a while since we’ve played around with rhythm games and bringing them back might not be such a bad thing. Unless of course bringing them back means we’ll have a new Guitar Hero and Rock Band game every eight to ten months, with track packs released every month or so. In which case, it will be a very bad thing.