It seems as if game developers are increasingly creating “Season Passes,” a program that lets a gamer pay a one-time (usually subsidized) fee for all the downloadable content for a certain game.

DLC for The Elder Scrolls V: Skyrim changes the game to let players fly dragons, a new mechanic not included in the original game.

Ubisoft has done it with Assassin’s Creed III, Activision for Call of Duty: Black Ops II, and 343 Industries for Halo 4. In fact, they’re becoming so increasingly popular, we’re beginning to worry about whether or not developers are pushing out half-baked titles (okay, 90%-baked) to get the game out the door and charge more for it later.

With games nowadays, you get whatever is included on the disc, but developers have found a way to continue to monetize the players after the original game is being played day in, day out. Downloadable content has been around for a long while, but the concept hadn’t really taken off until a few years ago.

Big developers have begun to take notice that they can make money with DLC early and often and are charging more and more for additional levels, maps, and characters for use in games they already charged a full $60 for. Let’s be clear: developers can charge whatever they want for their games, and frankly, if a game is an enjoyable experience, we don’t mind paying more than asking price for it. But our concern lies more in whether or not developers are using DLC to cheat a bit. 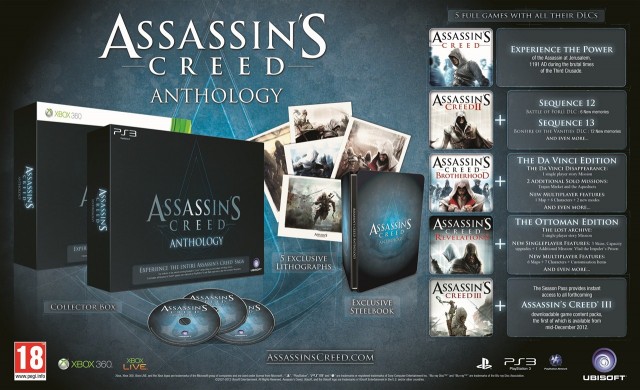 Of course, when you buy a season pass and you’re also a hardcore gamer, you might end up buying it all over again when you buy the anthology collection, too.

But what about quality? Are gaming companies also using DLC to patch other components of the game? In some cases, yes; there have been a few instances where downloadable content actually changes the single-player component, but these kinds of things are usually bug fixes. But that brings into question whether or not we should allow games with bugs to be shipped, or what the tolerances should be for a developer to fix them as they are found. In most cases, downloadable content doesn’t do things like this, but it must always be in the back of a developer’s mind that there will be a chance to patch a title once launched, so maybe that 3,204th bug report isn’t as important as it seems.

There is of course a benefit to having downloadable content, and that is, quite simply, more content! The fact that gamers have the choice and can speak with their wallets is why gamers will always win. Sure, you might have bought Assassin’s Creed III and hated it (we’re not sure why, though), but there’s no real way to tell whether you’d like it or not until you bought it. With downloadable content, however, if you don’t like the game, you won’t buy the extra content for it. If you do, you show your support by buying some more stuff from the developer and publisher and get some new goodies in return. It’s as simple as that.

There are good and bad ways to implement downloadable content. We can’t stand seeing new content that is thin and expensive. Stuff like avatar clothing and a new skin for our character doesn’t do anything for us. On the other hand, a half-dozen new multiplayer maps is certainly nothing to scoff at.

The pricing models for these kinds of additions tends to even out to about half a game’s initial price. A season pass for a title can be anywhere from $20 to $40 for a typical $60 game. That cost can be high for some, but when you consider that it extends the life of your original $60 well into an extra years worth of playing, whether it’s worth it or not is less of the question as it becomes whether it’s worth it or not to you.