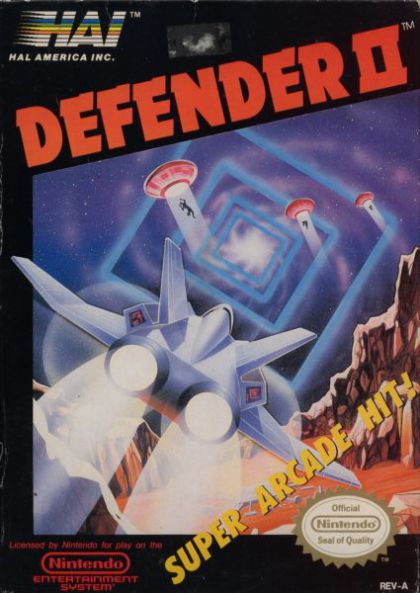 Originally released as Defender Stargate in arcades in 1981, Defender II (released on the NES in 1988) is one of those games I wish I could have played as a kid.  Growing up, I was a big  fan of space shooters and, every chance I got, I would spend quarters upon quarters on these painfully addicting games.  I relished those experiences, but never really bothered taking advantage of the console ports (still trying to figure that one out). As I’ve gotten older and begun to revisit my old school roots more and more I’ve come across a lot of nostalgic favourites as well as games I never had the pleasure of experiencing, one being Defender II.  Luckily, the NES port is so good, it’s about as close as you’ll get to playing the real deal, and that’s saying a lot.

Defender II is pretty unassuming at first glance.  The cover tells you everything the game has to offer, but considering the wide variety of space shooters available at the time you’d have to already been avid fan of the arcade game to really know and appreciate what was in store.  For those of you who have never played Defender or Defender II, your objective is to destroy all enemies in each level and protect your people from their evil clutches.  Sounds simple enough, that is, until you get a feel for the game itself.  Each level takes place in a circular map with a stargate that transports you to the other side of the level.  You can move freely in all directions and have access to a smartbombs if you’re ever in a bind. 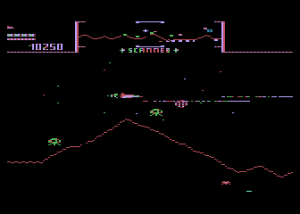 As you change directions, which you’ll have to do pretty frequently, the view shifts to show more ahead of you so the experience can be a little disorienting at first, but becomes a pivotal part of the game.  Pressing and holding left or right activates your thrusters so if you have a lot of momentum in one direction and double back in the opposite you’ll skid, but as you get used to alternating back and forth you’ll gain better control over the game’s excellent use of inertia.  After a few minutes of practice I found myself skidding past enemy fire and firing with stealth precision.  It’s hectic, yes, but the controls are some of the tightest you’ll experience in the genre.

In addition to the arcade mode there’s also a Mode B which is a little more difficult, starting you out on Level 3 or so, but with no other difference besides the level jump.  There’s also a 2-player option mode, which I didn’t get the chance to try out, but I can imagine it’s just as fun as playing single-player as long as you’re both relatively familiar with the game’s controls. 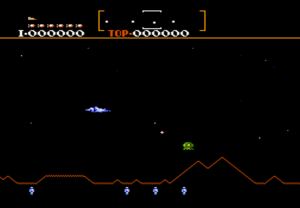 Despite being a great console port, Defender II is a little lacking compared to its arcade counterpart which offers a different bonus setup than the original. At 20,000 points you’ll get an extra life and a complete bomb refill, whereas in the arcade every 10,000 points you get an extra life and bomb. It’s nothing substantial, but the original really caters more to its arcade-playing crowd.

Defender II offers much more than I would have ever anticipated from the game.  It may not be an exact port but it comes pretty damn close to the original.  The controls are clearly the highlight here even if they do take some getting used to, and offers an intense, unique sense of action I don’t think I’ve ever experienced.    This game might seem pretty lackluster compared to today’s share of games, but any arcade nostalgic will no better than to dismiss such a compelling game.