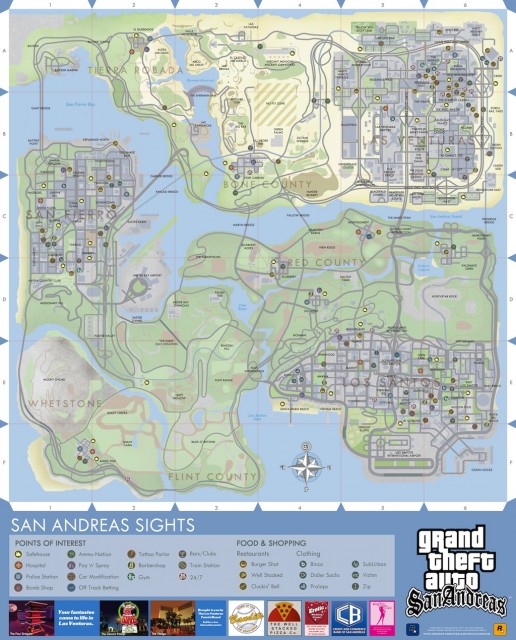 Having just picked up these posters depicting classic areas from The Legend of Zelda: Ocarina of Time, we can seriously appreciate beautiful (and sometimes abstract) video game art in its highest form.

Rockstar Games has decided to give gamers a similar ability by making the world maps for three games in their mega Grand Theft Auto franchise available for download as huge jpeg files. The titles include GTA III, GTA Vice City, and GTA San Andreas.

The maps get better looking as the series progresses chronologically. The map for Grand Theft Auto III is overrun with characters from the game and doesn’t make for a very attractive wall-hanging by any means. However, both the Vice City and San Andreas posters are beautifully suited to be framed and put on display.

Rockstar is doing this to celebrate this week’s release of Vice City Anniversary Edition for mobile devices including both iOS and select Android devices, as well as the PlayStation Network.

Take a look at the prints at their full sizes by clicking here:

The graphics themselves are not massive, but they’re large enough to have properly printed and enjoyed in a gaming room, man cave, or whatever you call that corner of your basement that’s overrun with electronics and sports memorabilia.