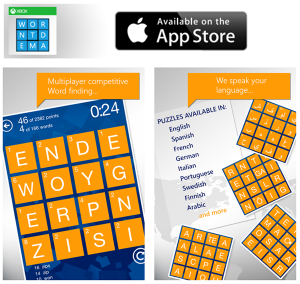 Microsoft is treading into some new territory lately with the launch of Wordament for iOS. It’s a word game that is not dissimilar to Boggle, where you and a few friends gather around to spell out words by connecting blocks.

However, there are two big draws with Wordament for iOS. First up is the online multiplayer component. There is no single-player component to the game, although you could also argue that the entire game is single-player based. You find words in a 4×4 grid of letters alongside hundreds, if not thousands, of players doing the same with the same board from all over the world. It’s quite intriguing, as there are usually about 200 words to be found in each puzzle, some of them containing all six letters.

Best of all, there’s no set up for multiplayer or online connectivity. Just launch the app, and you go. There is only ever one game going at a single time, so it would be nice to see the game expand to include local multiplayer for you and a few friends, but it is likely that Microsoft is just testing the iOS waters with this.

Perhaps even bigger than the multiplayer aspect of Wordament is that it lets you sign in to your Xbox LIVE account to earn achievements by playing this mobile game. Not only do you have the opportunity to best some people online, but you can earn up to 50 achievement points for doing so. Yes, it’s a far cry from the usual 1000 point allotment (more if you count downloadable content) but this is a free word game for your iPhone, so you can’t expect the world.

Is Microsoft planning on making the jump into the app marketplace on iOS? There is a Windows 8 version of Wordament available, and while that means it is automatically available for Windows 8-based tablets as well, there is no mention of Android compatibility. We find that a bit odd considering Microsoft and Google are not nearly the type of rivals Microsoft and Apple are, but perhaps the folks in Redmond understand the Apple opportunity a bit better.

Unfortunately, there are no familiar grey popups that let us know when we’ve earned an achievement, but Microsoft has carried over its familiar Metro user interface into the menus as well as the game itself.

Give Wordament a try. Put aside its weird name and somewhat basic graphical style and check it out for yourself here (iTunes Link).