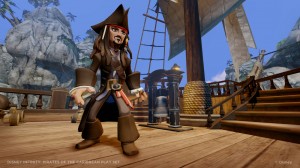 A few weeks ago, we presented to you Disney Infinity, a new sprawling world in multiple Disney universes.

Disney Infinity will use Skylanders-like plastic figures from Disney franchises to control characters within a new open-world game. Launching with 20 characters, the only franchises we’ve seen characters from are Pirates of the Caribbean, The Incredibles, and Monsters, Inc.

Each franchise is said to take place in its own “Play Set”, a town of sorts that can be combined or set next to play sets from other worlds within the universe. Of course, the real draw here is the plastic figures and a new component called “Power Discs” that players use to unlock items and customize their in-game play sets. It all sounds like an elaborate TV-based trading card game to us, but who knows how it will all actually play out.

While we’re not sure which console’s visuals we’re treated to in the video below, we do like what we see. The graphics are nowhere near perfect, but they manage to combine a few different art styles very well. The super-CG of Monsters University and The Incredibles comes across beautifully while a realistically-rendered Black Pearl appears dockside.

Disney Infinity is said to be launching in June of this year and Avalanche Software is handling developing suites for the game on Xbox360, PlayStation 3, Wii, Wii U, 3DS, PC, and some mobile platforms. It’s a pretty ridiculous list of platforms, and honestly makes us question whether this can all be pulled off as the sprawling game Disney sounds like they want it to be, but this could also be a game that’s been in development for more than we realize.

Take a look at the trailer below and expect plenty of Disney Infinity news in the coming months, including the use of Indiana Jones and Star Wars in the game. Okay, we made that last part up.