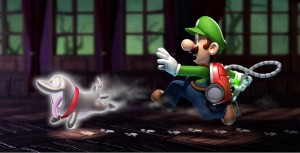 Luigi’s Poltergust will be back to sucking up baddies in March.

Originally planned for last year, Dark Moon has been delayed to Q1 of this year. Likely to anchor Nintendo’s portable offerings (while Pikmin 3 takes up the duties on Nintendo’s home console), Dark Moon seems to have corrected a lot of the gripes people had with the first title, released over ten years ago on the GameCube.

Luigi’s Mansion is one of the few Nintendo games that hasn’t followed the same path as all the other games in a given series. In this version of the game, the Dark Moon shatters and turns all the good ghosts into the world into baddies that start running amok. It’s up to Luigi and his Poltergust 5000 to take care of the menaces.

There will also be multiple mansions in this game, as well as the ghosts’ abilities to defend themselves with household objects that might reflect Luigi’s strobe light. We’ve only seen ghosts wield pots and pans for protection so far, but who knows how creative Nintendo’s team got when designing Dark Moon.

It appears as if there is a ton of diversity in Luigi’s Mansion, and the trailer and screenshots we’ve seen for the game have only made us want to go back and play the original that much more. Which we’re going to do. So we’re going to end this article.

See you March 24th with our review of Luigi’s Mansion: Dark Moon!