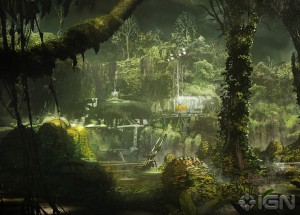 It\’s odd for a very secretive company like Bungie to come out and actively say what they\’re going to be discussing at a major gaming event like GDC, but that\’s exactly what\’s happened.

The team\’s new IP, Destiny, will be the focus of an entire session at this year\’s GDC, or Game Developers Conference in San Francisco. While we don\’t know exactly what the chat will cover, the panel itself is called \”Brave New World: New Bungie IP,\” and we expect it to be more in-depth than a general how-to guide to come back from a major game franchise like Halo and start fresh.

We\’re supposed to hear about the next ten years of Bungie and their development, and since we know that Destiny is actually a game with a much larger, umm, destiny, that doesn\’t seem farfetched at all.

We\’ve been spoiled by concept images as well as official Destiny images released by Bungie just a few short months ago. It\’s really time that we got to hearing more about the new franchise, and at the very least, more about how it came to be and just what we might be able to expect from it.

With Destiny expected to release some time in 2013, it\’s unclear if Bungie will have a booth at E3, if they\’ll be in with their new pals at Activision, or if they\’ll be skipping the show altogether. We have our hopes on a Microsoft Press Conference unveiling of a level or mission in the game since the blood runs deep with Microsoft for obvious reasons. Plus, it would just be cool to see those guys on stage again.

What is also unseen is how quickly this title will head into the next-generation of consoles. With a multi platform release, it could be interesting to see what happens if Microsoft and Sony release their consoles months or years apart. Will Destiny have a counterpart on each generation? That\’s the most likely scenario – for the first entry in the series, at least – but who knows but Bungie at this point?

GDC runs from March 25th through the 19th and we\’ll have tons more information about Bungie and the panel as it becomes available.