We don’t know how many times we’re going to post about the next Xbox and PlayStation consoles, but we know that we’ll report all the big news until we get their actual unveilings, whenever that may be.

In typical pre-next-gen console fashion, we’ve got a site, VGleaks, claiming to know Microsoft’s new system architecture and specifications for their next console. While the leak looks legitimate, if only because it goes into so much detail, it isn’t exactly difficult to make stuff like this up. Regardless, what we’re hearing is pretty cool, so here it is. 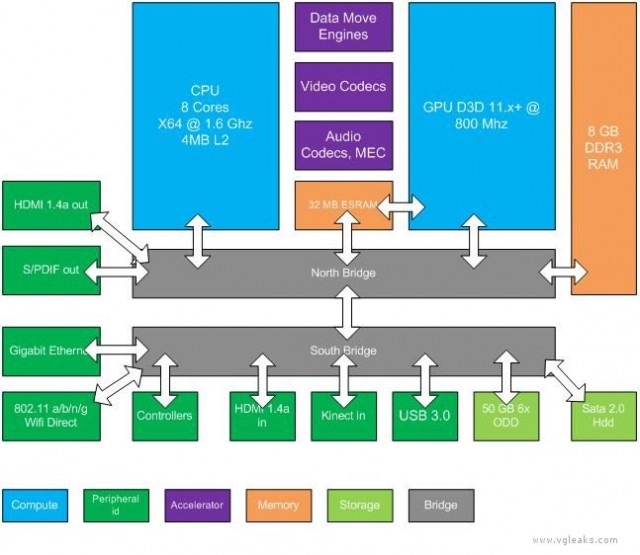 The alleged system design for the next Xbox, codenamed Durango.

The next Xbox, codenamed Durango as we’ve all heard before, will contain an AMD processor with 8 cores, each running at 1.6GHz. The console will have 8GB of memory and feature a built-in hard drive (no surprise there). Apparently, the CPU is supposed to be one of AMD’s cost- and power-efficient varieties which might signal that Microsoft is going for size and power efficiency with this console, something the Xbox 360 hasn’t really been known for. Not with that massive power brick, anyway.

Maybe more interesting than what actually amounts to a decent gaming PC in raw specs is that the console is said to include a “natural user interface” sensor. That sounds a heck of a lot like Kinect to us, though we’re not quite sure what it is because there is still a Kinect input on the console itself, according to the leak.

The optical drive Microsoft is supposedly opting for is a Blu-ray drive capable of reading up to 50GB discs, which is what everyone expects given the amount of data next-generation games (and even some PS3 titles) are expected to chew through.

The speed of the processor in the next Xbox is said to be quite low, and that makes a lot of sense and doesn’t all at the same time. Microsoft has routinely given up on caring about size with its consoles (at least before it remodels them). It also doesn’t make a heck of a lot of sense that they’re concerned with power consumption by going with a lower clock speed. With that said, Microsoft could be going for a whisper-quiet design and smaller footprint because the trade-off is making due with eight cores of the lower clock speed. If the console is optimized to take advantage of all eight cores as opposed to wanting two or four cores of higher speeds, the console could be even more efficient than it would be otherwise.

As you already know, all of this is pure speculation, and while it’s exciting to think about the next generation of consoles, there’s nothing saying that any of this will be true. The full list of alleged specs of the new console are below, as well as a system block diagram you can find above.