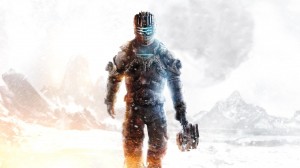 Those who were lucky enough to keep tabs on EA were able to get a sneak peek of what’s in store for gamers in the upcoming release of Dead Space 3 in the form of a digital demo. As demos go, it was significant in the amount of detail it gave, and gave gamers something to look forward to from Visceral Games’ latest entry in their popular franchise.

The demo starts after the crash of your ship, and puts you right into the action. You’re Isaac Clarke, the protagonist of the last two games and the unfortunate soul that fate has tasked to rid the world of the Necromorph infestation and the crazy religion that is Unitology. For those not familiar with the games, you should probably play the last two first before getting this game, as story and continuity are important in a game like this. For those who didn’t bother the play the last two, at the very least, read the Wiki and get yourself caught up.

Necromorphs are a species of “space zombies” that are amalgams of flesh without the need for vital organs or blood to survive, and are therefore pretty much damn near invincible, save for repeated curb stomping of their fleshy bits. They serve as the primary antagonist to our hero and the entire Franchise is around the mystery that is them. However, unlike the previous two games, instead of in space on a ship or space station, you’re on a planet! Specifically, Tau Volantis. And this place makes Hoth look like Florida. 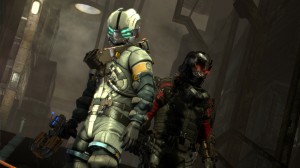 Tau Volantis is a frozen planet with the remnants of an old mining colony on it’s surface. Aside for seeming inhospitable, run down, and dangerous, Tau Volantis has a hidden secret in it’s frozen wastes, the promise of a means to end the Necromorph infestation. Whether or not that is true, Tau Volantis houses some advanced Necromorph variants, so it’s also rumored that a marker resides somewhere on the planet. These facts are the reasons why Isaac Clarke is driven to go there. In search of the truth, he’ll come face to face with an environment as vicious as the creatures that inhabit it. Despite the inhospitable nature, Tau Volantis makes a beautiful backdrop for the storyline of Dead Space 3.

Simply put, the demo plays well and gets us really excited for the game. The augmented reality interfaces are still in place, but even more dynamic (despite some being illegible on smaller TVs), and the environment is crisp and feels like it’s own entity. One of our favorite parts of the demo was actually when you find the first suit changing machine. To most people, it’s just a machine to introduce armor upgrades and skins. Other gamers will recognize it as a symbol of the changeover from Dead Space 2 to 3; the old, dirty, broken suit, replaced by the new winterized wear for our hero Isaac. 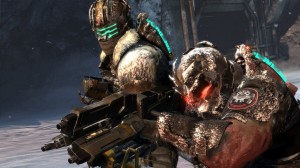 At the same time as the discovery of the machine, you find a workbench to modify and create weapons and blueprints. There’s enough customization here to satisfy our RPG tickle, but not so much that it drowns you in complexity. The same could not really be said for the combat, but that’s most likely do to having to catch up on the battle system, or just not reading the instructional text.

One last thing that must be explored, for this first look review to be complete, is the co-operative mode. Co-op in Dead Space 3 is as interesting as the story is in single player, except you get a buddy named John Carver to break the silence. It’s drop-in-drop-out co-op, which is cool, but also a constant reminder that Isaac might be hallucinating a buddy that isn’t really there. Co-op is largely the same, except for some Army of Two-style events that require both players to simultaneously do something, which, honestly, isn’t a big issue, unless you get lost as hell, and then your partner has the uncontrollable urge to feed you to a phallic tentacle pants Necromorph because he waited.

Is Dead Space 3 going to be revolutionary? Probably not since it uses the same formula as previous games in the series. But that means it’s consistent and it is at least somewhat different in setting than the previous games. Will it scare you like the horror game it purports to be? Probably. Will it give gamers a difficult game with tons of action and fun? Definitely. It’ll be exciting to see the full game come February 5th, and hopefully it lives up to the hype. We’ll make sure we let you know if it does.