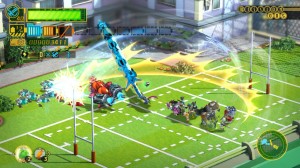 Nintendo’s classic franchise aren’t the only games that got some love in the company’s Wii U Direct. In addition to Mario, Yoshi, and Zelda all making appearances, Platinum Games’ The Wonderful 101 also got some airtime.

There’s nothing really in the trailer that we haven’t already seen, but the video does its job of getting us excited for the game again.

For those who don’t know, The Wonderful 101 is a very Pikmin-like game in that you control a bunch of tiny people that work together to accomplish a task such as killing an enemy or destroying a building.

The trailer – and therefore the game – is super colourful and over the top with Power Rangers-style exclamations and ridiculous enemies. Audio design seems to be impeccable, with music that matches the tempo of the action but still manages to keep that friendly yet over the top sound.

Take a look at the trailer below and let us know what you think about the game in the comments. We still don’t have a release date for the game, but we are expecting it in early 2013 since Japan is still expecting it within launch window, which means we should be seeing it before the end of March.