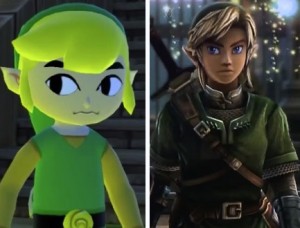 Nintendo gave us some incredible news about the state of the Zelda franchise this morning in its Wii U Direct broadcast. As Nintendo tends to do, they gave us more than one entry in the franchise, announcing both a Wind Waker HD remake as well as confirming that a new Zelda is in the works.

The first announcement was actually about the new Wii U title. While no concrete details were given regarding timeline, title, breadth of the storyline, or anything of that nature, we know that the team is hard at work reconsidering everything we know about the Zelda series and getting back to basics.

Eiji Aonuma was the one to actually discuss Nintendo’s work on Zelda and he mentioned two key things that the teams were looking at. The first was classic Zelda mechanics such as playing dungeons in a certain order, while the other was playing the game by yourself.

Apparently, the team tried to make Skyward Sword a much more non-linear adventure than it was, but they didn’t work on that aspect of the game early enough and it ended up being scrapped from the game. Regarding the single-player aspect of the game, we’re not really sure how a 30 to 40 hour game experience would really be played out in pairs (or even more people), but we’ll put our faith in Aonuma and his teams to create the best experience they can.

The teams are also experimenting with different graphical styles, noting that the game will not necessarily be based on the HD Experience they showed off at the Wii U’s unveiling at E3 2011. 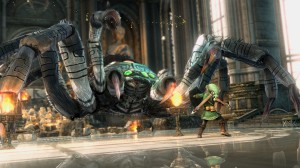 The other big bit of news on the Zelda front is about Wind Waker, and more specifically, its high definition remake. This one wasn’t entirely out of left field, but was also a game that no one really thought was going to happen. Nintendo keeps saying that the next Zelda game they’d make would be a new experience, but that was for portable systems specifically, not mentioning console remakes. Oh, Nintendo, how you can be a slippery one.

There’s really little way to describe what we’ve seen of the new Wind Waker other than drop dead gorgeous. The graphical style looks identical to the original game yet completely different at the same time, and there are what appear to be real-time lighting effects on buildings and water. These seem like minor things, but they really do a wonder for the game.

Wind Waker isn’t simply being given a 1080p resolution bump like you might find with the Dolphin Emulator. This is a complete graphical overhaul and remake from the ground-up. Ocarina of Time‘s remake tended to have a lot of graphics and texture maps replaced with higher resolution ones, while there were some changes made to the game’s structure and puzzles. However, overall, there were very few changes made to the game itself. We don’t know if Nintendo will be following in that remake’s footsteps by creating the exact same game, but we know we wouldn’t mind if they included something like Master Quest to mix things up a bit.

In terms of new features Aonuma did take the time to announce, we can expect the upgraded graphics (duh), a tuned up overall experience, the ability to play entirely on the Wii U GamePad, as well as Miiverse compatibility, though whether that functionality is in the game directly like New Super Mario Bros. U or just a community remains to be seen.

We’re hoping for a full physical disc release and cool collector’s edition bonuses so that we can prop our 2013 version of Wind Waker right next to our 2003 version of it. We expect to see a playable version of the game at E3 2013 since it is set to release this fall.

Take a look at some incredible visuals from the new HD remake of The Wind Waker and see for yourself just how delicious the game looks!