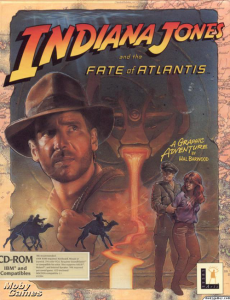 The Indiana Jones franchise made a huge positive impact on many people’s lives. Even today, the films stand the test of time with their witty dialogue and fantastical action sequences.  Some might argue that the characters lacked originality, but these clichés were always playfully silly and allowed so much more focus on the action-packed plot.  Let’s face it: the franchise is a classic.

LucasArts clearly saw something in this colourful world, and for good reason.  They went on to create a series of Indiana Jones games, with one of the most notable and finest examples being Indiana Jones and the Fate of Atlantis.  If there was ever a game that epitomized Indiana Jones it was this game, which daringly explored a whole new adventure that felt all-too familiar.  By today’s standards this game may lack in graphics, although the 256 colour VGA graphics were state of the art at the time, but it makes up for that in its creativity and love for the universe.

The moment Fate of Atlantis starts we immediately get a dose of what’s to come with the game’s tongue-in-cheek interactive intro.   In this game its Indy’s job, with the help of archaeologist-turned-psychic and former flame Sophia Hapgood, to uncover the secrets of Atlantis before, of course, the Nazis do and declare world domination.  Typical, yes, but so fitting! 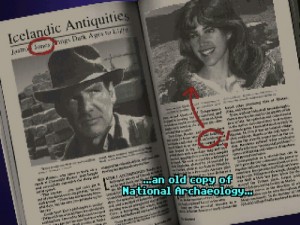 The audio is big highlight to the game, although you’ll want a CD-ROM copy of the game (or later edition) in order to experience the impressive voice acting.  With that in mind, unfortunately Harrison Ford didn’t do the voice of Indy, but the acting is still top-notch, perfectly suiting each character’s distinct personality.  The musical score is just as immersive, and brings each location to life.

Fate of Atlantis utilizes the classic SCUMM point n’ click interface seen in other LucasArts games like Monkey Island and Maniac Mansion.  While we don’t see this interface used in adventure games today, it’s a nice change of pace and even gives the genre a little extra challenge with the various verb options.

In terms of overall difficulty, Fate of Atlantis offers a whole range depending upon the path you choose in the game.  The “wits” path lets you tackle your quest alone, the “team” path has you accompanied by Sophia who provides hints, and the “action” path offers fewer and simpler puzzles and more fighting.  The choice is yours how you play the game, but it’s worth checking out each of them if you want to experience the game a little differently every time.  I wouldn’t go as far as saying Fate of Atlantis is like three games in one, but it provides just enough replay value.

Fate of Atlantis is a true classic among adventure games and is still one of the best in the genre.  Not only does it offer an immersive musical score, it also does a convincing job of creating a new world in the Indiana Jones universe, it just goes to show how much the developers really cared about the franchise when creating this game.  It wasn’t so much about creating a game that looked and felt like Indiana Jones, but more a way to transcend all of that and create a new Indy adventure for players to embark on.  You really can’t get much better than that.