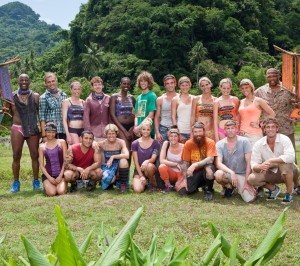 With a new season of Survivor on its way, subtitled Caramoan, CBS has released a short video encouraging fans of the show to meet the cast.

While we can’t say this is the most diverse cast we’ve ever seen, the fact that this season is a second helping of the show’s Fan vs. Favorites format, we do enjoy knowing some of the castaways because it brings some familiarity but also some intrigue to the table.

You’ve got Phillip Sheppard, the overly-adamant Army veteran with pink underwear and Brandon Hantz, the unappreciative little brat nephew of one of our favourite players, Russell. Some of the hotties like Brenda and Andrea from Nicaragua and Redemption Island, respectively, are also returning, presumably to add some spice to the game, because we really can’t remember what either of them did in their own seasons of the show.

The new castaways truly don’t seem that interesting. In the video, they boast about not caring about sleeping in the cold or not being able to eat, and that the experience of the show and the game will be enough for them. While we’ve never played Survivor or done anything remotely close to what the show promises, we can say that being on the show will not be enough for them to be able to give up their luxurious lifestyles. They’re in for a huge shock and it could be their downfall.

We’re quite excited for Survivor: Caramoan because, while it doesn’t seem like it’ll be a runaway success of a season the way The Australian Outback or Heroes vs. Villains were, it does offer some interesting characters that will surely clash.

Meet the cast of Survivor: Caramoan and let us know who your favourite castaway is!