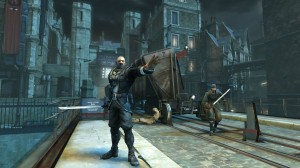 Developed by Arkane Studios, Bethesda published Dishonored on October 9th of last year. The game’s trailer promised a great many things in the murder department. Bethesda had us entranced with the variety of death-dealing, the steampunk dystopian landscape of the city of Dunwall, and the haunting sea shanty of Drunken Whaler, which currently reside on our iPod under the “Murder” playlist. The fact that the trailer was made entirely using in-game graphics and action, we knew we had to buy it, so we pre-ordered it at Gamestop for the Xbox 360 and awaited the release date.

Unwrapping the game, we input the obligatory Gamestop code for our pre-order goodies, and dove into the world of Dishonored. Not to spoil much of the game, the story begins as you, Corvo Attano, the Empress’ Protector, returning early from a trip to find a cure to a mysterious plague that is ravaging the citizens of the Empire. Upon arriving, you meet the young Empress-to-be, Emily, and her mother, Empress Jessamine Kaldwin. Upon ruminating about the state of her subjects, Lady Kaldwin finds herself with a blade through her gut, her daughter kidnapped by spectral assassins, leaving Corvo to take the fall for it all. Finding himself in prison, Corvo discovers deus ex machina, in the form of a key and mysterious note, has let him out of his cell to begin the path of restoring his honour.

From the beginning, the game forces you to make a choice between being a cold-blooded killer seeking revenge, or the sandman, putting people asleep while seeking the truth. Normally we dislike black and white choices, mostly because if you stray just a bit from the path of good, you miss out on an achievement or special ending that you spent 20+ hours working to get. Sadly, this is also the case with Dishonored. Kill anyone and you miss out on a glorious 100 Gamerscore bonus, which isn’t a big deal, unless you’ve spent the entire game trying to kill absolutely no one to do it (a difficult feat considering everyone deserves it). Somehow we played the whole game, not killing a soul, and still failed the achievement, which led us to play the game murdering everyone and everything in blood-rage. 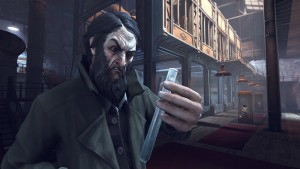 No joke. We played the game again, this time picking our loadouts and perks to be a mystical master of murder, and we immediately discovered something: killing is difficult. No, we don’t mean morally difficult, because in Skyrim we’ve wiped out entire villages just because we wanted a guy’s shirt. Instead, the game makes it dificult to kill just one person and not get caught. And it’s brilliant! Murder breeds more murder, and the landscape of Dunwall changes for that. More infected weepers, more killing, and more rats; death begets death. This is a rather poignant lesson, and we would have taken it to heart if it wasn’t for the fact that putting a spring razor trap on a toilet seat is a hilarious way to kill a guy (seriously, be patient and try it).

Luckily, in our blood-soaked play through, we got to see a lot more of the voice acting, beautiful kills, and some of the more creative kills (when you go to the Golden Cat, pray to God that your target is in the sauna). On the other hand, subduing enemies and silently taking out your opposition is incredibly rewarding. You plan and think harder than you otherwise would, and some of the “peaceful” means of eliminating targets are so much more rewarding than just killing them. All in all, the tone of the game drastically changes depending on your method of retribution, which is as crafty as the set design for each mission.

There is no real way around the fact that Dishonored is a linear game, which is in opposition to a number of Bethesda’s open world games. However, it is better to say that Dishonored is a linear narrative with open world sets. Each mission features a different section of Dunwall, with similar setpieces; however, with each play through, the target locations change, and the tactics you use to reach them do as well. The missions are large playgrounds with a near-infinite number of ways to have fun. This is what makes the game fun, but the major drawback with this strategy comes from the length of the game. Dishonored is a frighteningly short game at 22 hours of gameplay and an experience that could be less than 6 hours for some, which doesn’t give you a lot of time to enjoy these intricacies.

In short, Dishonored is a great game by Bethesda that takes us out of the usual mire of first person shooters. It’s legitimately a good action-adventure RPG, and the stealth elements are fun and inviting. A lot of the spells are useful, but not completely necessary (there’s an achievement for not using any), but being a spectral assassin is still badass without the magic toys. One of my biggest gripes about this game is the fact that your right hand must always have the sword equipped. We think for peaceful players, this is a terrible inconvenience as there is no use for
a sword, but there might be for spells like Blink and Possession, or something like the tranquilizer crossbow. This is definitely something we suggest for a Dishonored 2, which we greatly hope does get developed, as we loved the world of Dunwall and hope to go back again soon.