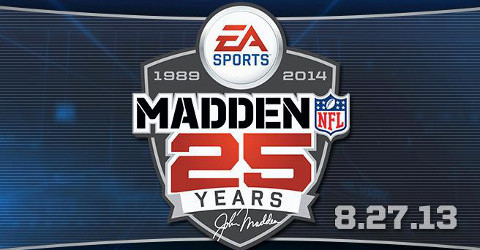 A lot of sports news today, though we suppose it’s fitting given that it’s all coming out of the House of Riccitiello.

Alongside a name change to Madden NFL 25 for the 2014 NFL season, EA Sports has announced that its latest title in the NFL franchise will pay tribute to the past 25 years of EA making games around the sport.

Much like they’ve done in recent years, EA is also putting the cover athlete to a vote, beginning on March 11th. There are 32 current players as well as 32 all-time superstars in the sport that you can select from. Really, what you’re deciding on is who gets injured next season, should a current player win. You do know about the Madden curse, don’t you?

To make sure all of the superstars or current players don’t get knocked out too early or all at once, each set of players will be forced to rounds of infighting before their champion faces off against the champ from the other bracket.

We don’t have the names of players in each bracket as of yet, as they’ll be announced on a special edition of SportsNation on ESPN2 the day that voting begins. Fans will then be able to vote on ESPN.com and voting will take place over an unannounced amount of time. The game launches on August 27th, so we’ll go ahead and assume voting will be done by early-Summer at the latest.

In all, the Madden franchise has raked in nearly four billion dollars in revenue, and the cover vote for the most recent title, Madden NFL 13, raked in nearly 20 million votes through the course of the voting period.