Titled “Pathways Out Of Darkness”, an homage to one of their first games, Pathways Into Darkness, the video goes into a very high-level view of development of their latest game. It touches on a lot of points very briefly, and we’ll really need more information that this to surmise any true opinion of the game (that’s what E3 is for), but give the video a look, and we’ll give it a shot with what we’ve got so far.

Bungie notes a few things in the video that immediately stood out.

First, they don’t discount the Halo franchise for being what really got them to where they are. They acknowledge it, learn from it, and have moved on to bigger things.

Second, this talk of a ten year lifecycle is a repeated theme that really makes us feel like they’re planning out the entire arc of the Destiny franchise. With Halo, they planned out a single game, and with the two follow-ups, they had more of a chance to develop their stories together. Further still, when 343 Industries developed Halo 4, they did it knowing that they would be doing another trilogy of Halo games, and that the goal would be to create one cohesive world throughout. 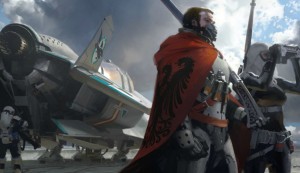 What’s perhaps most interesting about Bungie’s take is that they mention the world being fluid and ever-changing, not necessarily in the way that they imagine. Will Destiny have an always-on component that makes it more like a persistent world, or will this be a first-person shooter like we’ve come to know from the company? Really, only time will tell.

The game does have a lot of Halo references it seems, whether they’re there intentionally, or whether Bungie just can’t get away from that style of game. The story is about a world that’s been attacked by another species, has a guardian that has protected it, and it is clear humans will have to fight against this. Beyond that, the world actually reminds us more of Star Wars than it does of Halo, as you can see droids walking around in multiple scenes.

Bungie is clearly trying to do something unique by making the game available on every platform known to man, it seems. While the main experiences will likely only be playable on home consoles, there are secondary apps for smartphones and tablets that seem to be in development. It seems to be independent of Microsoft’s SmartGlass technology, but it could be the way that Destiny becomes that persistent world we thinking about, especially if you can interact with it, even if only in a small way, with your phone.

Audio is being helmed by Marty O’Donnell and the game has a full orchestral score and some familiar sounding strings, but otherwise, the audio is all brand new to Destiny. Of course, the score (what we’ve heard of it, anyway) sounds like something you might have heard in Halo, but that’s a familiarity on a lower scale that breeds quality music and should make the game instantly relatable.

Bungie has done what appears to be all the legwork for laying the foundation of an incredible series over the next ten years. As it stands right now, you can pre-order the title for Xbox 360 and PlayStation 3 via Bungie’s site, but we’ll see if that gets updated once the next-generation consoles are brought into the limelight.