At Microsoft’s X-Series event last week, we got the opportunity to take a look at a bunch of upcoming games, one of which was Irrational Games’ BioShock: Infinite.

The BioShock series is one that we have very specific memories of. The first game scared the hell out of us in the beginning, and while we got used to the style of game we played since then, that was the part we remember most about the series. There has always been an eerie nightmarish weirdness in the games, and while that weirdness is not the same in Infinite, it is definitely there.

The part of the game we got to play took place in the sky world of Columbia. The game looks excellent, though time was clearly spent on developing a larger game rather than a perfectly pristine one. Don’t get us wrong, the game looks great, but there are a few games out there that look better.

The BioShock series isn’t exactly known for its bright colour palette, but Infinite changes it up with not only brighter colours, but a brighter landscape. That occurs inherently when you set your games far above the clouds, and when you venture inside, the same shades of brown and grey from previous games show their heads and the game becomes instantly familiar. The brightness that you see outside is very natural, with a blinding sun and few shadows in the world to really give it a lively feel.

Despite how lively the game might feel, there certainly are a lot of people trying to kill you. Weapons are incredible and beautiful, and while not entirely unique (shotguns and pistols are common in Columbia), there are magic spells called visors that add some variety to the game. You can hurl fireballs at people or render them motionless, though you’ll need salts to give you power to do it. Luckily, they’re scattered all over the world in glass jars and easy to find. Because that’s realistic. 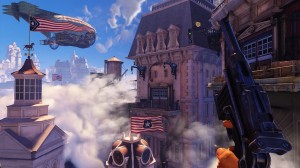 Of course, we jest. BioShock has never been a series entirely based in realism. The city of Columbia is, after all, a floating one, where buildings are connected by a hook system and float in the sky independently of each other. This is actually quite the sight, as you see skyscrapers wavering in the clouds and need to traverse one to the next to get where you need to go. The game will show you other things like this that you’ve never seen before, ranging from somewhat interesting like the buildings moving, to the truly bizarre like your flesh being incinerated to the bone which actually gives you the ability to fling fireballs at your enemies. We’ll assume someone was on acid when they put this one together.

While we only played a small portion of the game, it does seem like there’s a lot to do in Columbia. The world doesn’t quite feel as large as Skyrim, but it’s certainly larger than Skyloft, which probably isn’t saying much. There are a ton of open-world RPG elements here like looting buildings and clearing fallen foes of their valuables. Looting happens very quickly, and it seems as if you get to choose how much elements like stealing stuff from a body really slows down your game.

The one gripe we have with the game so far is that the characters we saw all seemed to be cut from the same cloth and offered very little in the way of variation. They stood around like they were waiting for us to do something, and they spoke as soon as you walked in the room. It wasn’t very conducive to making the player interact with them, though it was fun as hell putting a bullet through their skull and watching others run for their lives.

While we played Infinite at Microsoft’s X-Series, the game will be coming to PlayStation 3 and PC alongside the Xbox 360 on March 26th. 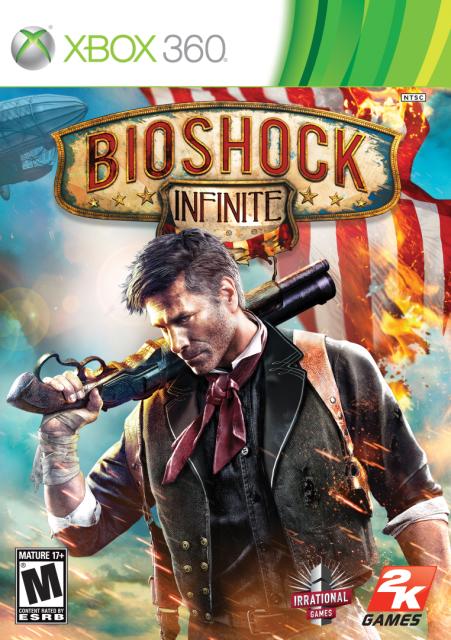