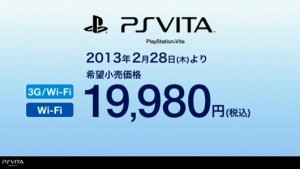 The price drop, currently headed to Japan only (with no word on other markets), affects both the 3G and WiFi-only model, but get this: they’re both at the same price now. The PlayStation Vita has gone from ¥29,980 ($323) to ¥19,980 ($215), representing a reduction in price of more than a third. The WiFi-only model saw a more modest, but still welcome 20% drop in price.

Sony Computer Entertainment Japan (SCEJ) has also announced that, from the period between February 28th, when the new pricing goes into effect, and March 18th, new Vita owners will be able to get a one-week trial of PlayStation Plus. They should be able to grab all the free games from that period, including Uncharted: Golden Abyss and WipEout 2048, and keep them well after their subscription has lapsed, so long as they don’t remove them from their console.

What’s very curious is that Sony has announced the same pricing for both models of the Vita. We’re trying to think of a reason for it, and the only thing we’ve come up with is that Sony is phasing out the 3G models and needs to sell them off as it ceases production on them. It’s quite bizarre, but then again, we are talking about Japan.

Nothing has been announced for North America or any other region just yet, but we expect that if we do hear something about a price drop, it will be when Sony holds its event on Wednesday. We expect a price drop to bring the Vita closer to the Nintendo 3DS XL price tag of around $200, which makes sense given current conversion rates of yen to dollars.