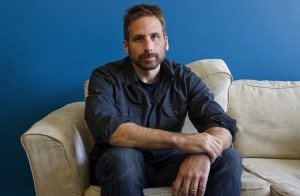 Two years ago, Ken Levine, creative director and co-founder of Irrational Games, stood on stage at Sony’s E3 2011 Press Conference to announce that the Vita (then the NGP) would be getting a version of BioShock.

Two years later, the game hasn’t even entered development according to Levine, and he says he can’t do anything about it.

“As I said before, that’s sort of out of my hands right now. That’s with the business guys … negotiating that business deal and trying to make that work for both sides. I’ve got my fingers crossed that that’s going to happen because it’s something I want to do, but until somebody starts signing the checks, there’s nothing I can do,” Levine said.

At the tail end of last year, Levine said that he and the team at Irrational had a ton of ideas for how to make the Vita version of BioShock interesting and unique. That also signals that it wouldn’t be a port of the first two games or the upcoming BioShock: Infinite. He also said in that interview that gamers shouldn’t get their hopes up, as the game would only happen if the “stars all align.”Unfortunately, at this point, it doesn’t look like they’re even close to aligning.

If the game ever gets green-lit, it will happen once BioShock: Infinite is released into the world and sales are measured. We’d guess that a small team will take the reigns, with Levine supervising as he goes to work on what is likely to be BioShock 3. If Infinite does poorly, we think BioShock 3 is even more of a guarantee as it returns to the original storyline, but you can kiss the Vita version goodbye.

Levine tends to be pretty vocal on Twitter, and following him certainly won’t hurt if you want the latest news about what he’s working on straight from the source. Don’t get your hopes up, though. He isn’t the type to leak stuff.

BioShock: Infinite comes out March 26th and BioShock Vita comes out… well, if it gets made. At least we’ve got the BioShock Mini Pack in LittleBigPlanet Vita, right?