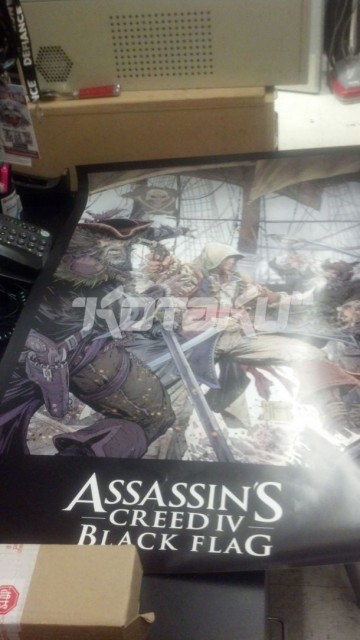 Kotaku seems to have uncovered a poster that uncovers what is reportedly the next Assassin’s Creed game.

The poster, reportedly set to run in gaming stores on Monday, March 4th (that’s this coming Monday for all you not paying attention), reveals the latest game in the franchise, Assassin’s Creed IV, subtitled Black Flag.

Apparently, the game will feature a new protagonist, new time period, as well as a new setting. The poster depicts a ship overflowing with pirates, both swords and guns drawn.

Ubisoft did report that their new game in the Assassin’s Creed franchise would be entirely new, despite Assassin’s Creed III just launching a few months ago. The poster does look genuine, and the artwork is done by Todd McFarlane, which seems like an odd thing to note if the poster was a fake.

Kotaku also recently uncovered that the back of the poster features a map labelled “The Caribbean Islands 1715” which mainly shows Cuba and Jamaica, with insets of Florida and some islands. This side of the poster also features the Assassin’s Creed IV Black Flag logo which offers further authenticity.

Assassin’s Creed III featured some ship exploration, and that was a great way to test out the gameplay mechanics that are likely to become a bigger part of this game if it is indeed set between multiple islands in the Caribbean.

Other details on the rumours include that the protagonist of the story is Edward Kenway, the grandfather of Connor from ACIII, but we’re not sure exactly how that ties in. We can say that, with this game taking place in 1715 (according to the map), the timeline matches up with the period we played through as Connor in Assassin’s Creed III.

There’s really no doubt to us at this point that this is the real thing. Ubisoft is holding an Assassin’s Creed announcement event tomorrow where rumour has it they will reveal the future of the franchise (boy, “the future” is a popular theme this month). Black Flag is the first main game in the Assassin’s Creed series to have a subtitle, which is an interesting change, though what it means, if anything, is still up in the air.

What will the rumour hold for us tomorrow? We assume Assassin’s Creed IV will launch this holiday, which would likely make it a launch title for next-generation consoles. Will it be a dual-generation release and hit everything? Will it come to Wii U?

These questions are likely to be answered tomorrow, and we’ll have all the latest on it as it happens right here, as well as on Twitter and Facebook. Stay tuned! 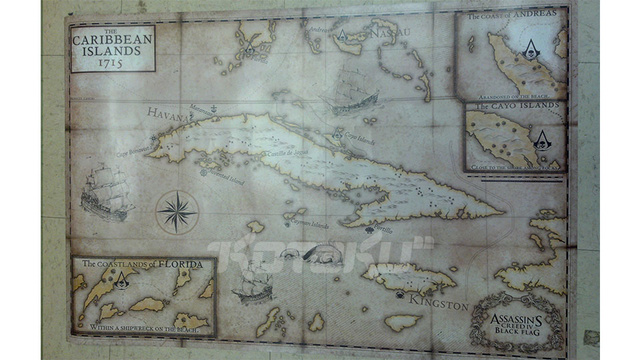