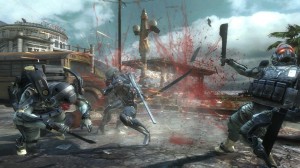 Metal Gear Rising: Revengeance is my first dip into the Metal Gear world as I had never played a game in the series before.  With no prior familiarity to the franchise, I played and reviewed the game with zero expectations or knowledge of how a Metal Gear game feels.  My only prior knowledge of the series is that it is one generally known for its stealth, ironic considering Revengeance is anything but a stealth game.

Revengeance‘s story follows a samurai sword-wielding cyborg ninja named Raiden who is attempting to take down a private military company known as Desperado Enterprises. Raiden’s battle with the Desperado Enterprises comes at the player fast and hard right from the start, setting up the intensity to be found throughout the rest of the game.  The story is one of the game’s better features and provides for some of the most exciting and action packed cutscenes I’ve ever seen in a game. The cutscenes are all very well done and visually spectacular which is why there are probably so many of them.  At times it feels as though you are watching the story unfold more than you are actually playing through it, especially at the very beginning of the game.  The inclusion of some scattered interactive cutscenes help slightly in countering this feeling.  Although as glorious as the cutscenes may be, it appears as though all the game’s artistry was dedicated to these scenes instead of the in-game graphics.  Outside of the cutscenes, Raiden and his enemies are the only one’s containing any detail as the backdrops and props are bland in comparison. 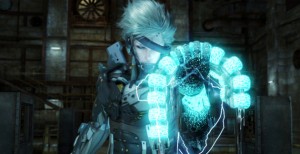 Playing through the beginning of the game is a smooth experience as there is no learning process melted into the story.  Playing tutorials and side missions are optional and allow the player to learn and practice move sets and controls on their own time.  This feature allows the gameplay and story to flow much better as you are immediately thrust into intense warfare and epic boss battles instead of having to learn the controls first.  The evolution of Raiden’s character physically and mentally into a killing machine is what really drives Revengeance‘s story and game play.  His evolution provides for new armor upgrades, weapons, and abilities, helps avoid stale and repetitive gameplay as these unlockables create entirely new fighting styles and strategies.  The upgrades really help keep the game feeling fresh despite the lack of variety for objectives and missions.  It is an arcade style of game at its core as from level to level it is almost always the same format involving the process of eliminating waves of enemies to get to a boss battle.  One feature that keeps the repetitive objectives fresh is the interactive environment as you can chop up a variety of objects such as trees and pillars to rack up combos and experience. 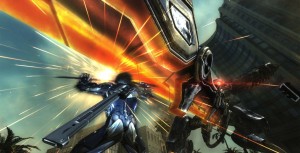 Like any good arcade game, boss battles are definitely what make playing the game worthwhile.  The boss battles are epic to say the least and you are thrust into them from the get go.  Revengeance is not an easy game thanks to the boss battles and depending on the game’s difficulty level you may find yourself getting stuck on certain foes.  There is a lot of strategy involved in defeating Revengeance‘s bosses as the game requires a mastering of both offensive attacks and defensive parrying to be successful.  Completing a boss battle is a very rewarding feeling as your character receives large amounts of experience to unlock upgrades as well as unlocking any weapons that boss may have had.

Revengeance‘s controls are somewhat of a button masher at its core as most of the fighting tactics involve stringing together combos using only two buttons.  Sometimes it’s hard to tell what combo you’re pulling off but regardless the attacks all looks awesome.  The sword fighting action really shines as the game’s controls involve a unique feature that allow you to slow down time and use your samurai sword to literally hack and chop away enemy limbs and body parts with exact precision.  Revengeance‘s most enjoyable moments are during these time altering slashing sprees.  Along with the sword fighting aspect, there are also many tactical secondary weapons and items available to your character which improve fighting strategies and character stealth.  EMP grenades as well as boxes used for hiding are among the secondary items which provide a nod to the Metal Gear series playing style with which it is known for.  Stealth definitely takes a back seat in this game though as sword fighting action really defines Revengeance.

Revengeance‘s audio is one of its best features hands-down, with its arcade style sound effects and energetic soundtrack.  The soundtrack definitely will catch your ear as there are a wide variety of great tracks littered throughout the game’s levels.  Boss battle music can best be described as fast tempo arcade rock music.  These fast paced tracks really create the sense of urgency you want when fighting epic cyborg bosses.  The soundtrack really sets up the dark and violent mood of the game and provides that feeling needed for fighting hordes of futuristic cyborgs.

Overall Revengeance is an entertaining linear action game that provides a feels and plays like a standard arcade style, fighting game.  It is a very short game with minimal replay value, after completing the game the only thing unlockable is a few new difficulty levels, weapons, and character outfits.  There are a lot of great features but Revengeance could have benefited from the inclusion of other game modes.  Story mode stands by itself as the game’s only playable game mode which gives Revengeance a bit of an empty feeling as a whole.  If you are fortunate enough to not be a Metal Gear rookie like myself, then you may find enough extra value in the story and characters to get more enjoyment than I did out of Revengeance‘s one and only game mode. 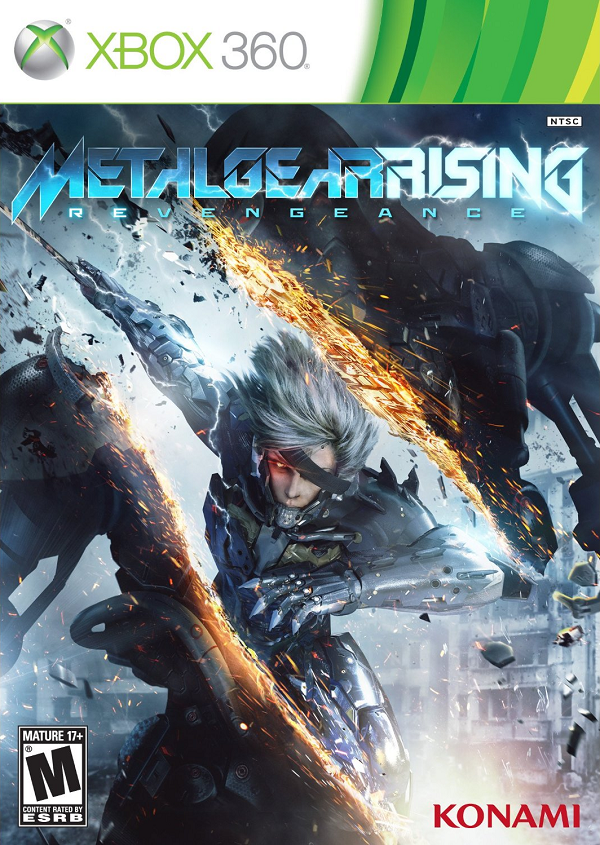