Ni No Kuni: Wrath of the White Witch represents an unprecedented collaboration between two incredible film and game studios — namely, level-5 and Studio Ghibli. These two studios are powerhouses in their respective fields, both in their native Japan, and around the world. Level-5 was first founded in 1998, but in a little more than a decade, has already sprung into the top 10 largest developers in Japan. They are most well known for their Nintendo DS franchise Professor Layton, a puzzle-adventure game, which sold over 12 million copies worldwide. Studio Gibli, on the other hand, is an Oscar-winning movie studio, renowned for their fantastical and beautiful anime films, such as Spirited Away, Howl’s Moving Castle, and Ponyo.  Their last film, The Secret World of Arriety, grossed over $250 million dollars worldwide.

Although Level-5 is most well known for their Puzzle game Professor Layton, they actually have a deep past with the RPG genre. Their very first game was Dark Cloud, a critically and commercially successful RPG for the PlayStation 2. They have even been entrusted to develop two different Dragon Quest games in conjunction with Square-Enix over the years, both of which went on to win many awards. So if you had any qualms about their qualifications to produce a quality RPG title, to put it simply, don’t. (Alliteration FTW) 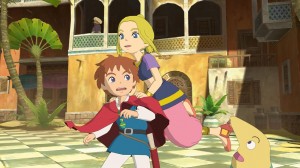 Many, many people were excited to hear about this partnership, when it was announced over 5 years ago. The amount of talent and expertise that went into making this game has resulted in quite a lot of hype and expectation to be built up and tied to Ni No Kuni over these long 5 years. And the year-long localization process didn’t make the wait any easier. Despite the much-too-long wait, Ni No Kuni has finally arrived stateside, and I’m here to tell you, it was worth it.

The first thing you will notice about this game, and rightfully so, is how incredibly beautiful it is. Every scene looks like a still out of one of their films — Level 5 did an incredible job producing cell-shaded graphics that perfectly encapsulate Ghibli’s whimsical and enchanting art style. In conjunction with the mouth-watering visuals, Ni No Kuni recruited the help of Joe Hishaishi (well-known for scoring many Ghibli films) and the Tokyo Philharmonic Orchestra to produce a jaw-dropping score. The music is not only swelling and dramatic, but also perfectly suits the magical and charming world that they created. It is simply one of the greatest game scores I have ever heard, and will likely stand the test of time.

Although the graphics and music are incredible, the main storyline of the game is slightly too simple for my taste — the plot is not nearly as complex or eccentric as most Ghibli endeavors. This is mainly because Studio Ghibli worked solely on art direction and character design, while Level-5 was responsible for everything else. The story is still charming and whimsical, but often falls into the trap of using clichéd and tired plot devices. Level-5 just doesn’t have the background or talent to produce stories that are as compelling as feature length Oscar-winning films, which is, of course, understandable. But they had already recruited studio Ghibli’s help in producing Ni No Kuni, and it seems like a misstep to not utilize it to its fullest potential. Despite its simplicity, the story, in collaboration with the excellent localization, voice acting and art style, produces a world that you will fall in love with. 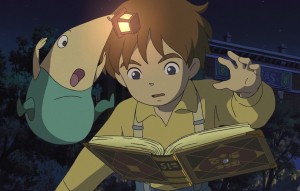 Ni No Kuni begins following Oliver, a 13-year-old boy who recently lost his mother. During his grieving, his stuff animal, Drippy, comes to life and tells him all about a whole new world that is filled with magic. Oliver learns that he can become a wizard, and with the help of Drippy could even bring his mother back to life.  In his adventures, Oliver can capture and train creatures called “familiars.’ There are over 300 creatures to potentially capture, each with a myriad of abilities called “tricks.” These tricks can range from healing spells, to fire attacks, to physical attacks, and more. Finally, these creatures also have types that work in a similar way to Pokémon — certain types are more effective against others, in a manner similar to rock-paper-scissors.  The battling system can get quite complicated, but the game does a great job of slowly introducing new mechanic to you slowly. Throughout the game, you eventually acquire new members to your party, who in turn can control 3 creatures each. This adds an even deeper level of complexity, but once mastered, makes for a very interesting and nuanced battle system.

At any one time during a battle, you can only control one of the player characters — Oliver, or one of his companions. Once in control of a character, you can set general guidelines for your partners, who will be controlled by the AI. For example, you can have one companion focus on healing, and one on spell casting. The AI actually does a good job making decisions on its own during battle. When in control of your own character, you can defend, cast spells, or attack physically  (which often won’t be as powerful as spells or attacks performed by your familiars) or you can send out a familiar.  Once you perform any given specific action, there is a short cool-down required until you can perform it again. This is most important for defending — you must anticipate, by using visual cues, when an enemy is going to perform an attack, and defend at the right moment. If you misjudge the timing, because of the required cool-down, you will often not be able to defend the real thing. 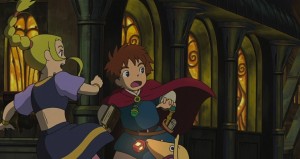 The battles feel frantic and fast paced, while still strategic and that each decision you make matters. It incorporates the best elements of action RPGs and turned based strategy. You control the creatures’ locations on the battlefield, but once a specific action is performed, AI takes over until they enter their cool-down cycle. And while the battle system does get incredibly complex, but because of the way that the game slowly introduces each new mechanic (for example, you don’t have a second or third party member until almost 20 hours into the game) you never feel overwhelmed.

The majority of this game will be spent in battles, but there is still a ton of content outside of them. There is a deep Alchemy mechanic, where you can create different weapons, items, and treats by mixing and matching ingredients. You also can feed your creatures these treats that you have created to increase particular stats. There are also dozens of side quests, which include errands that you can perform for townspeople or bounty hunts where you can track down particular enemies and face them in battle, both of which will reward you with rare items.  Overall, there is over 40 hours of mainline content, and additional 40 of peripheral content, all of which contain exciting and captivating gameplay.

Despite its cute and charming in its design and story, don’t be fooled. Ni No Kuni was certainly created with the adult Japanese RPG fan in mind, and it delivers in almost every way. If you love the RPG genre, Studio Ghibli, or just beautiful and epic-feeling games you should give Ni No Kuni a try. While it may be too complex for child to appreciate, its whimsy and its magic will certainly make you feel like one all over again.