At a small event last week, Nintendo gave press access to two of the biggest games to hit their console and portable platforms this spring. Luigi’s Mansion: Dark Moon for Nintendo 3DS was on display (and we’ll have a hands-on preview of that soon), as was LEGO City: Undercover which is making its way to Wii U in just over a week.

LEGO City: Undercover is the first in the LEGO video game series to break away from an existing license. While titles like LEGO Indiana Jones and LEGO Harry Potter are immensely popular (and with good reason; they’re great games), LEGO wanted to create something from their own universe.

Naturally, they looked to the line of toys that had the most expansion possibilities and was perhaps the most relatable, and came up with LEGO City: Undercover. Rather than just being a minifig inside a box of LEGO, Chase McCain is out and about in the real living world of LEGO City.

The story of the game follows Chase as he earns his stripes as a police officer and hunts down criminals, the most elusive of which is Rex Fury who has broken out of prison. Chase is able to don many costumes and outfits giving him the ability to do many different things. The robber, for example, has a grow bar, while the police office can slap cuffs on criminals. This is borrowed almost verbatim from the franchise-based LEGO games, but it’s a solid mechanic, so there’s no reason not to use it.

The graphics of LEGO City: Undercover leave a bit of something to be desired. On the one hand, the game looks great, but when we reminded ourselves that we were playing on Wii U, we thought they looked a bit undercooked. With that said, we’re talking about a game designed around pieces that are hard-edged and full of 90-degree angles.

We don’t think we’ve played a brighter game than Undercover. Even including Nintendo Land and its acid-tripping gameplay, LEGO City outdoes every other game on Wii U in terms of having a really vibrant colour palette. The colour is all put to good use as well, as the game is littered with little 1×1 pieces of LEGO to collect, each with what seems like their own shaders.

There’s a very simple way to tell what is an interactive element in Undercover, and that’s if it is a LEGO brick or not. If something is made out of non-LEGO materials like rock or metal, and it is clearly rendered to look realistic as opposed to plasticky, it isn’t to be touched. That is one of those design mechanics you know was designed early on and used throughout the development of the game. 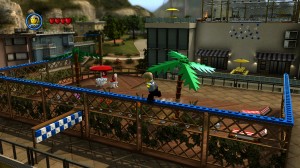 The game is remarkably easy to control, as you might expect from a LEGO game. Characters move fluidly and it’s difficult to make a mistake with which button to push to control the game. What is not difficult to do is to make a misstep and send your character swiftly off the edge of a cliff, or worse, to a previous part of the level that it will take five minutes to climb back from. This problem has always plagued the LEGO games in the past, so we can’t really blame the development team for it, though it would be nice if it was tightened up a bit.

While we only got to play through a small chunk of the game, LEGO City: Undercover features a lengthy storyline that should run about 40-50 hours to fully uncover, according to Tt Fusion.

We’ve got the game in-hand as of today and will be cracking it open shortly to experience all the vehicles, characters, and story arcs of LEGO City: Undercover and report back to you with our full review next Thursday, March 14th!