There’s a lot of movie news today, and Iron Man 3 is rounding out the list.

The theatrical trailer for the film has been released and is making the rounds on the web. We’ve seen a few previews for the film already, but this is a full two and a half minutes of Tony Stark in trouble.

Robert Downey Jr. is of course making the return for this third instalment, and all that we see in this trailer is him getting beaten to the ground. The new villain, The Mandarin, is not a technology titan like Stark, but manages to crush his mind and destroy everything he’s created, or so it seems in the trailer.

The movie is clearly being taken to new heights, and we see tons of new features in Tony’s arsenal. This time around, there are dozens, if not hundreds of armor suits, piloted by who we can only assume are members of the Air Force.

The trailer also features the return of Pepper Potts, Stark’s assistant and girlfriend, played by Gwyneth Paltrow. She is also in danger this time around, as The Mandarin has kidnapped her and forced genetic experiments on her as well as others in the final entry in this trilogy.

This trailer is about being badder than Iron Man ever has been, and it delivers. While we’ve seen some more spectacular scenes in movies before, it’s hard to argue that the famous Stark mansion being blown up and a few dozen super soldiers showing up isn’t ridiculously awesome. 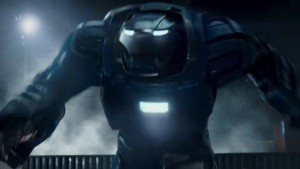 There are also new designs of these armour suits, as one resembles a quarterback in shape and size. It’s massive, square, and built like a tank, as if the suits weren’t already tough enough.

Tony can apparently control his armour just with his mind this time around as well, as we see it naturally form around him when his house begins to crumble. He can also send it to rescue others, as Yahoo! Movies reports that Pepper Potts is encased in a suit when she is thrown against a brick wall. Tony’s glove also manages to detach itself and pull him to safety from the wreckage underwater.

That’s a whole lot of tech, and we’ll see if it all comes together fluidly or in a big mess when Iron Man 3 hits theatres on May 3. In the meantime, take a look at the trailer below.