“In brightest day, in blackest night,
No evil shall escape my sight!
Let those who worship evil’s might,
Beware my power; GREEN LANTERN’S LIGHT!”

For fans of DC Comics and Green Lantern, the motto of the Green Lantern Corps was burned into your very being. Perhaps you have even recited the motto and pretended to “suit up” in your own Green Lantern uniform in the quiet of your college dorm. However, not many know of what is meant by the “blackest night”. Well, thanks to Injustice: Gods Among Us you can feel the terror that is the blackest night. 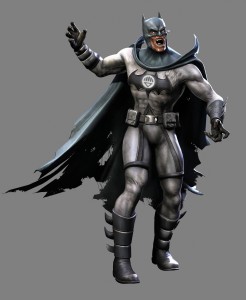 Blackest Night is the name that leaked as the first official DLC for Injustice by Germany’s Amazon page, that would come bundled with the game if preordered on Amazon. The DLC is based on the comic with the same name by Geoff Johns, in which the Black Lantern Corps, under the lead of Nekron, revive long dead superheroes and people to make an army of the undead, the most notable being Batman. Sounds awesome, but there is no evidence supporting that this storyline will be introduced with the DLC. Instead Blackest Night is similar to other DLC skin packs, which allows for all playable characters to get a Black Lantern skin in addition to their normal skin. It also suggests that there will be a “Zombie Mode” of gameplay, but still no word from NetherRealm Studios on if this will affect gameplay at all. NetherRealm Studios did say that they will have DLC based on the Red Son comic series, which will have an impact on Injustice’s gameplay, as it will play a what if story, much like Assassins Creed: Tyranny of King Washington, in which we see what would have happened if Superman was born under the communist regime of Soviet Russia.

It seems as NetherRealm will be drawing a lot of their DLC material from the comic series of old, which will be exciting, as there is a ton of great material out there for them to use. We only hope that they bring in A Death in the Family for a Batman DLC or Killing Joke. Regardless of our desires, we’re excited to see what else will be coming out of NetherRealm’s studios for the highly anticipated Injustice: Gods Among Us.