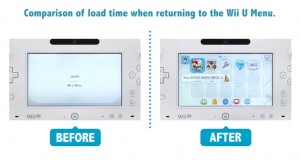 Look, we like the Wii U, despite what we might have said in the last episode of the 8 Bit Awesome podcast. And it looks like Nintendo is trying to fix some of the smaller nagging bits we’ve been experiencing since its launch.

The Japanese company has released a video comparing load times of the console’s menu screen from the retail version to their planned update. Fortunately, the load times are reduced to a much more reasonable nine seconds over the original’s 25-30 second time. That’s a huge improvement and brings it much more in line with Microsoft’s Xbox 360 and Sony’s PlayStation 3.

We tend to prefer the menu that pops up on the Wii U over the other two consoles also, as it provides more information, and easy access to more things.

Still, it is just a glorified, HD-version of the 3DS launch menu, so we do wish the console could run it a bit (or a lot) faster. What really bugs us is that the load times are anything greater than a few seconds, really. The home menu should just always be running in the background. It will take away such a tiny amount of power from the main console that the trade off would be worth it in our minds.

Look at any smartphone or even some computers. Popping back into the home screen or main menu takes less than a second in most cases, and most smartphones are running software just as sophisticated, if not more so, than the stuff you’ll find on Wii U.

Of course, we have to hand it to Nintendo for putting effort into fixing the problem the Wii U faced, and we’ll see how well it actually does when we get our hands on it and can put it through its paces. We’ve yet to see how quickly the new update will get the console running from a cold start, or how quickly Miiverse interactions will be, so we’ll keep you posted when the update drops sometime in April.